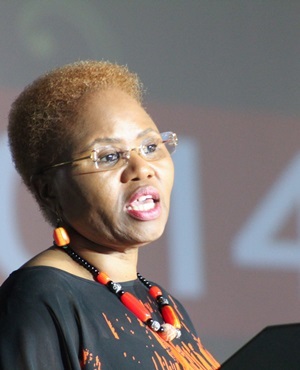 “Black people were never part of the economy of South Africa in terms of owning anything, therefore when they see other people coming from outside being successful they feel like the space is being closed by foreigners,” Zulu said in a phone interview on Wednesday.

“It’s important for the foreigners to share with the South Africans about what it is that makes it possible for them to be successful.”

At least five people, including a baby, were killed in attacks and looting of shops owned by Somalis, Pakistanis and other foreigners in townships around Johannesburg since last week.

The violence was sparked when a store owner in Soweto shot and killed a boy who he said was part of a group of teenagers trying to rob his business.

“It would not make any sense to impose a duty on foreign shop owners which is not imposed on South African shop owners,” she said by phone from Pretoria.

“Many foreigners are in South Africa legitimately, they are running legitimate businesses and are a vital part of the communities. It should not be conditional on any disclosure of trade secrets.”

Tension between locals and immigrants in townships have simmered since a wave of xenophobic violence in 2008 left about 60 people dead and 50 000 displaced.

Some locals accuse foreigners of taking jobs away from them in a country with a 25% unemployment rate.

Amir Sheikh, chairperson of the Somali Community Board of South Africa, said he’s held talks with Zulu and agree that more integration is needed between locals and foreigners.

“Working together in partnership with local South Africans is something we appreciate,” he said by phone on Wednesday.

“We cannot be an island of our own, we need to integrate and when we have integrated properly in the communities, work hand- in-hand with those in the same line of our business.”