The embattled governor of Kaduna state, Nasir el-Rufai tweeted a verse from the Quran on Friday to give himself hope to come out of his present mess. The governor has come under global condemnation for admitting to the mass burial of at least 347 minority Muslims in secret in a mass grave last December.

“FRIDAY REMINDER: “And whoever is conscious of Allah, He will make for him a way out, and will provide for him where he does not expect. And whoever relies upon Allah – then He is sufficient for him. Indeed, Allah will accomplish His purpose. Allah has already set for everything a (decreed) extent.” – The Holy Quran – Surah 65:2-3 – Jumaat Mubarak”

The comments were not kind to him. 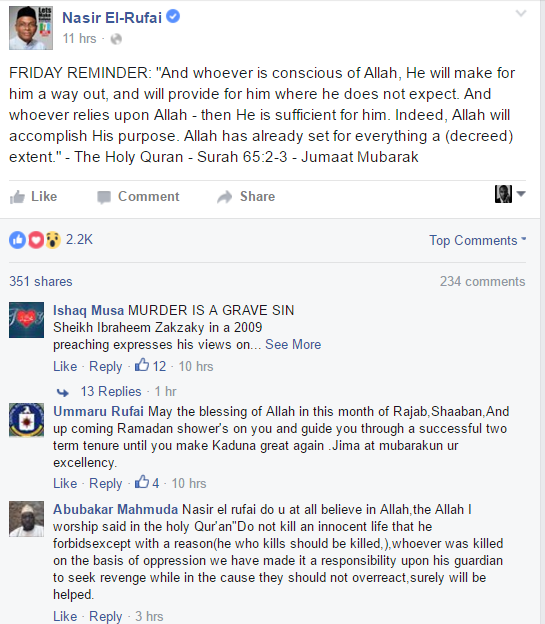 FRIDAY REMINDER: “And whoever is conscious of Allah, He will make for him a way out, and will provide for him… https://t.co/KB9u3vkaSk

The verses that followed stated:

Quran 65:8 And how many a city was insolent toward the command of its Lord and His messengers, so We took it to severe account and punished it with a terrible punishment.9; And it tasted the bad consequence of its affair, and the outcome of its affair was loss. 10; Allah has prepared for them a severe punishment; so fear Allah , O you of understanding who have believed. Allah has sent down to you the Qur’an.

The National Human Rights watch in a series of tweets since April 12th, slammed the Kaduna state government as being complicit in the #ZariaMassacre.

The government confessed this Monday that they mass buried as many as 347 victims secretly in the days after the December massacre in kaduna.

The organisation chaired by Chidi Odinkalu accused the government of burying the evidence and pressed for an immediate exhumation process and autopsies to find how the victims were killed, “bayonet, gun, burned, etc.”

The organisation berated the excuse that islam did not advise autopsy, stating that islam was for justice and that the excuse should be tossed. It further ridiculed why of all the 189 detained in the confrontation, all are Islamic movement and Shia victims and none are perpetrators.

When non-complicit gvt finds 100s of its citizens dead, it’ll work hard to identify perpetrators not criminalise the dead #ZariaMassacre /3

Rather than do any of wht it cld or shd have done in #ZariaMassacre, Kaduna govt focused as “municipal authority” on burying evidence /5

Kaduna State is prosecuting 189 ppl for in connection with #ZariaMassacre. All are Shiites. None are perpetrators https://t.co/7KEdpHtHZ2

Now that #ZariaMassacre Inquiry has learnt victims were buried in #massgraves, will it find out how they died: bullets, bayonet, fire….?