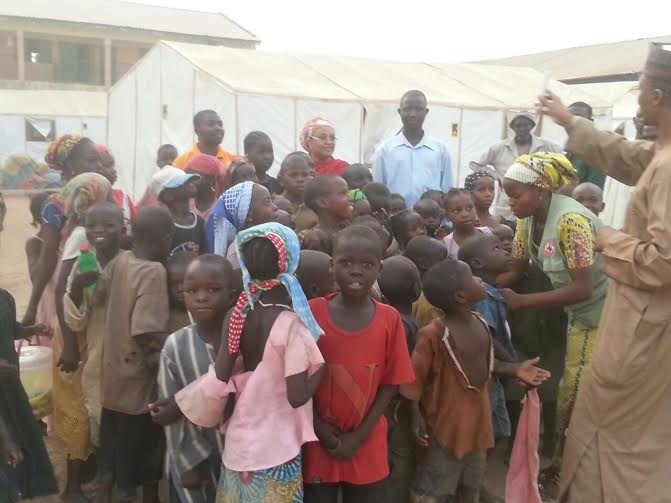 When I went to Maiduguri as a volunteer to assist the National Emergency Management Agency (NEMA) supply humanitarian aids to internally displaced persons, it was not a pleasant experience at all. This write-up is not aimed at making its reader uncomfortable; it is meant to create awareness about the plight of our brothers and sisters who have been abandoned in various camps.

After a seemingly endless journey, we arrived the city of Maiduguri. There, uncomfortable checkpoints could hold you up for two hours on a journey meant for 30 minutes. The town was virtually filled with people who were forced to flee their homes due to Boko Haram attacks.

At the camps, I saw a number of husbands who lost their entire family to Boko Haram. I also saw a number of widows who lost husbands and children. At the camps, I saw a horrific plight of innocent Nigerians whose legs were dismembered by bomb blasts. I saw some women who went insane for being victims of sexual assaults at the hands of Boko Haram. I saw some women who had been looking for any news that might help trace the whereabouts of their lost daughters who went missing when Boko Haram attacked Baga.

At the camps, I saw refugees who spent three hours waiting for aids and ended up having little to eat. I saw children who either lost their parents or didn’t know where they were. I saw a handful of boys who ate rancid porridge. I saw refugees being crammed in squalid tents that looked more like a pigsty than makeshift shelters. I saw filthy and acrid toilets that lacked water and other essentials.

When I went round the city to witness how people went about their businesses, I was also shocked. In Maiduguri, I saw some people who engaged in menial jobs, not because it was lucrative, but they had to keep their bodies and souls together. I saw 10 men venturing into a job meant for one man. I saw some once- happily-married women roaming the streets in search of alms.

I talked to an 18-year-old boy who confided in me that he felt abandoned because he had nowhere to go, no family to bank on. It was then I remembered that schools in Maiduguri were closed down.  For the first time in my life, I spent 24 hours without sleep. I spent two days without taking a shower, all in a bid to serve them with limited resources.
As I packed up my luggage to go, I took a cursory glance at a little boy who rushed to me, demanding that I take him and his mother along. He wanted me to adopt him, provided he would have a bright future. I only buried my head in embarrassment, knowing fully that I had little help to offer, let alone adopt the child. It was only when we were driving back home that I realised I was crying.

Let’s help assuage the suffering of our brothers in Maiduguri with everything humanly possible. Let us collaborate with NEMA and other organisations and help our fellow citizens in distress. They desperately need our services.