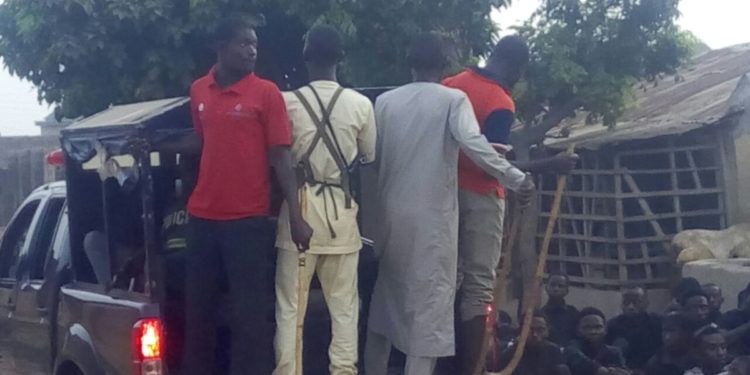 December 12th marks the third year since Nigeria’s army and police along with the Kaduna state government and under commander in chief Muhammadu Buhari massacred and secretly buried hundreds of Nigerian youth in Zaria.

The Nigerian army till date claims it only killed seven Nigerians however at a Buhari sanctioned Kaduna state judicial enquiry the Kaduna state government confessed to participating in the massacre and secret midnight burial of as many as 350 citizens.

Apart from many being burned alive, many of the victims were buried alive as the army took them straight to the burial ground without having them certified dead by medical doctors, a state testimony revealed.

In an act described as radical islamist fanatic inspired, graves of the Shia Muslims were also exhumed and the already dead were desecrated and dumped along with the freshly killed in the mass graves, one such being dug at Mando cemetery.

In spite of the conclusions of the Kaduna panel which recommended punishment for some soldiers in command including then General Officer Commanding the Nigerian Army’s 1st Division, Major general Adeniyi Oyebade, not a single soldier has since been punished and some have rather been promoted with Buratai’s tenure extended in show of Buhari’s official endorsement of the massacre of the Shia Muslim minority.

Details of the massacre indicated that not only were soldiers involved in the hunting down and killing of the Shia Muslims in Zaria, but the Kaduna state government participated as did Nigeria’s police who carried extremists in police vehicles to help the army kill, rape, burn alive and loot the despised Shia.

In a shocking media talk that December and the only president Muhammadu Buhari ever did, Buhari indicated that the massacre that transpired that bloody December was a lesser reaction than would have occurred had he still been in the army. “I am a sitting duck,” Buhari said, reeling on his seat. Watch that here: https://www.youtube.com/watch?v=k6ncKD4JdKk

In the massacre of that December, three sons of Islamic movement leader Sheikh Zakzaky were killed, allegedly shot point blank along with the Sheikh and his beautiful wife, Zeenat who were also shot severally while hiding in a bathroom of their house which had been set on fire. Zakzaky and his wife luckily survived the assassination attempt but were immediately locked up.

In spite of court orders for the immediate release of Zakzaky and Zeenat and their compensation financially and with a new accommodation the Nigerian government has since remained in contempt of court, refusing to abide by the court order and keeping Zakzaky and wife illegally detained with the excuse of doing so “for their own protection.”

Most recently, Buhari’s minister of information openly confessed to using the continued incarceration of Zakzaky as a means for government officials to squander or loot as much as 3.5 million naira monthly in so-called feeding money.

It is believed that the Kaduna state government and Buhari presidency has survived the incident till date due to extremist support blocks who hate the Shia more than rampaging terrorist Fulani terrorist herdsmen, Boko Haram and other actually openly violent groups including those who got 1000 Nigerians killed when Buhari lost the elections in 2011.

Believed to be some of the most patient and tolerant of humanity, there has been no deadly riot or terror action by the Shia Muslims who have been further oppressed with serial similar massacres and incarcerations since the massacre. In general while painted very distastefully in the political media, there is no public record of civilians the Shia Muslims of Zaria have ever killed. However as with all other chiefs of Nigeria there are realistic accusations of the Islamic movement establishing law and order in the communities it exists in, and engaging in massive rallies with organized crowd control, which has irritated citizens.

The US government, international organisations like Human Rights Watch, Amnesty International and the International Criminal Court have pushed for justice for the victims of the massacre and punishment of those in authority. Buhari has continued to protect the perpetrators and deny the victims justice.

As the Buhari administration and Kaduna state government celebrates the third year of its massacre, secret midnight mass burial and launching of its campaign against Shia Muslim minorities of Nigeria, we can only wish them God’s mercy. The Devil they say is the king of this earth.