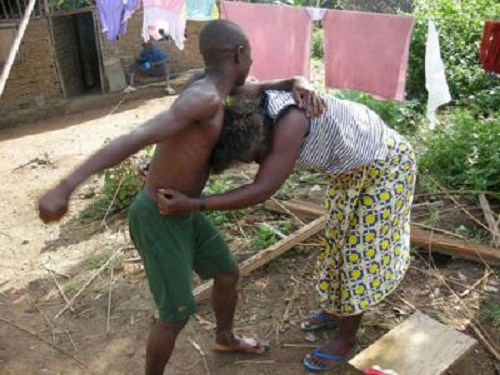 By Dayo Johnson in Akure

IT was double tragedy over the weekend in Ondo state as a 47 year old Ex banker now a Taxi driver after ten years of marriage stabbed his former wife Amudat Oluwafunmilayo Lateef to death and thereafter committed suicide by hanging himself.

The marriage was blessed with five children before things fell apart between the couple who lived at Omoniyi quarters along Agbogbo area, along Owo-Benin-Akure expressway.

The deceased wife aged 45 who was a trader at Iloro market Akure and hails from Ijaraisin in Kwara state.

Also the late Jimoh who was formerly a baker hails from Osogbo in Osun state.

Report had it that the couple’s marriage had been estranged in the last two years with the husband threatening to kill the wife and also commit suicide.

Sources said that family members agreed that they should separate for a while to allow time heal their troubled marriage following alleged battering of the wife by Jimoh after their inability to reconcile them.

Also another source said that two weeks ago Jimoh went to Court for a divorce and the court granted his request but when Oluwafunmilayo went back to the house to pack her belonging Jimoh pleaded with her to remain and not to leave him.

However, Friday afternoon, one of the children of the deceased after returning from school meet his mum in the pool of her own blood and the body of his father dangling from the ceiling of the house.

He reportedly raised alarm which attracted the residents and the whole community was thrown into confusion as a result of the double tragedy.

The chairman of the Landlord Association of Omoniyi quarters, Mr Ojo Oluwatayo with other landlords in the area rushed to the Divisional Police station in Ijapo to report the matter.

The DPO, SP Jane Mbanefo and other policemen according to investigation mobilised to the scene.

Vanguard gathered that the the bodies of the couple have been deposited at the state Specialist Hospital morgue for autopsy.

Meanwhile, the family of Jimoh has pleaded with the police to released his corpse to them for burial since he is a muslim.

Speaking with Vanguard the uncle of late Jimoh, Baba labaika said “We have reported to the Deji of Akure and we want to bury Jimoh in his house while his ex wife will be buried else where since there is no case.

Ogodo said that the matter was reported to the Police by the Chairman of the Landlord Association of the residence of the deceased couple.

He said that a blood stained knife used by the late husband to kill the wife was recovere from the scene of the crime.

The Image Maker added that Jimoh after stabbing the wife to death also committed suicide by hanging himself.