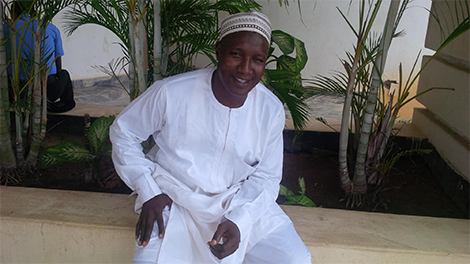 by Ibrahim Kabiru Dallah
Few days ago, I announced on Facebook that our brother in struggle Comrade Yusuf Abubakar Doma AKA Aluta Danger is out of Lafia Prison.
Today, I was in Keffi, Nasarawa State to honour an August invitation extended to me in the month of August by Comrade Yusuf Abubakar Doma to discuss some pending issues and the future of Nasarawa State Youth, guess what, the meeting was in the house of Senator Abdullahi Adamu (Sarkin Yakin Keffi), former Governor of Nasarawa State.
He asked as he welcomed me into the main building, “Dallah, you are here on my invitation, Alhamdulillah”.
I said, “Your Excellency, the next Governor of Nasarawa State, I will always be with you whenever you extend this kind of invitation to me”
“Dallah, Are you are aware that you are ONLY Comrade in Nasarawa State that I am just meeting since when I came out of that place called Prison, it is because you stood firmly behind me and May Allah reward you” He said.
As usual I said “Ameen”.
In the course of our discussion, I learnt certain things about life, freedom and how every comrade or activist should see himself or herself as a potential prisoner, it ain’t easy for someone to spent 1year and 6months in Prison and came out smiling with everyone around him.
As a matter of fact, we discussed at length how he was framed up for an offence he committed NOT, the young people in Nasarawa State must wake up to face the reality of life as those in the position of authority care less about the future of an ordinary youth in Nasarawa State.
Without sounding immodest, I met one-on-one with the hope of the future generation of Nasarawa State, I saw wonders, I encountered transformation in Aluta Danger, I saw creativity and innovation, I experienced new ideas from prison, I saw new Aluta Danger.
While in the meeting with him, I watched as his mobile phone rang endlessly from friends and well-wishers, I saw calls from prominent politicians in Nasarawa State asking where to meet him, I saw young people pleading to meet with him even in Abuja today and I hear with one ear that some self acclaimed youth leaders in Nasarawa State had already organised a Press Conference awaits Aluta Danger to addressed.
In my own personal opinion, there’s nothing good on earth like freedom but we are not afraid of prison if it’s in the course of emancipation of the young people from the shackles and pinnacles of oppression in Nasarawa State, I see myself as a potential prisoner in as much I am at the side of the people NOT oppressors.
Fellow Nigerian, may I deposit without sounding sensational that I saw capacity in Comrade Yusuf Abubakar Doma AKA Aluta Danger, no wonder some people’s are not really happy with his rising in political status.
On “his next ambition”, he explained thoroughly that when he get to the bridge he will surely cross it, in his words “Dallah, I love this your question with passion, for now, I just want to be silence on my political ambition but when I get to the bridge, I will cross it for once and for all”.
However, I asked “what’s your message to the young people in Nasarawa State”.
“Laughs, Dallah, are you a journalist, why all these questions”.
And I said, “No your Excellency, I just need a message to take home and tell the whole world about our one-on-one meeting”.
“It is alright Dallah, as a future leader of Nasarawa State, we do not have any other state than Nasarawa, as such, I want to urge the young people to remain calm and law abiding and pray for our dear Nasarawa State, on a final note, they should shun violence and cultism for better Nasarawa State”.
“I felt so ashamed, and almost cried that our future is void with the current Government and Al-Makura is wicked” I concluded.
My Dear readers and followers, you all know that it has been long I takes on Gov. Al-Makura for a reason best known to me as an individual but we are still giving him some benefit of doubt and it is not yet 100 days in office for a second term.
#Dazzol
Follow me on Twitter @ik_dallah