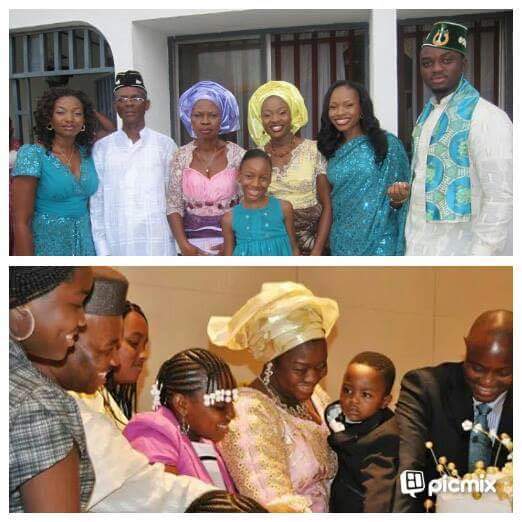 Dear Governor Godswill Akpabio,I actually set out writing this letter to my dad, to intimate him on what has been going on in our lives since his passing. I know a little chit chat would be a good therapeutic medium during this period. Then it occurred to me that he wouldn’t be able to read or even react to all I have to say,  so I decided to redirect and convey my feelings to someone who knows the reason for this continuous pain.

With the election euphoria, I know you are really busy but I trust that before retiring for the evening you will have time to peruse through your mail and by chance will stumble on my letter.Oops please ignore the fact that due to my emotional state I momentarily forgot a very vital training in letter writing, exchange of pleasantaries. Going through what myself and my family have had to deal with I am sure you understand it wasn’t intentional. So let me start all over, I hope you are holding up well were ever you are.

Sir, I know it is no longer news that your one time political ally and PDP chieftain from Ukanafun Local Government Area, Engr. Albert Ukpanah passed on to the land of the unknown last year on the 12th of March, 2014 at about 10:45pm. It is on record that you paid a  condolence visit to the deceased family and also attended the interment in the company of your wife and a good number of members of your cabinet who also knew our dad very well, therefore clearing every doubt of his death.

This letter is in memory of his one year anniversary and 298 days since you ordered the detention of his only son Odudu Ukpanah for a crime he didn’t commit.

I wrote this letter at precisely the very time my dad was murdered and believe his spirit is with me as I try to make sense of this nightmarish situation we have found ourselves.

Sir, while your once political affiliation to my dad is not my major concern, however I have missed so much the “us time” we used to spend together, when he will tell us the experiences he had with people he had met and interacted with while journeying through life and you are one of the people he talked to us about. He once told us how himself, Late Fidelis Etim and some other members of annang forum had received you before your swearing in ceremony as a Commissioner of Environment upon your arrival from Lagos. That began the journey of your acquaintanceship with my very amiable dad.

Always aiming to see young people succeed in their area of endeavor, he didn’t waste time in extending his benevolent nature to you by introducing you to his friends in Elf Petroleum now Total Fina Elf who were top management staff. The introduction stemmed out of the fact that through numerous interactions with his friends, he discovered the State was not benefiting very much from the community development policies put in place by the oil giant even though they are drilling oil from its territorial waters.

Thus to ensure the anomaly was corrected, he arranged for a meeting between your then ministry (Ministry of Environment) on behalf of the State Government and the management of Total. He knew once a symbiotic relationship was established, the State would benefit from it.The rest is history as even the scholarship slots many indigent children enjoyed through our dad’s relationship with the company was hijacked. The State couldn’t out of courtesy give a yearly slot to him as appreciation.

On one occasion, dad had returned from Port Harcourt with the sum of $5000(five thousand dollars) being PR for you and you were really appreciative of the enormous amount of influence our dad had. He wasn’t the kind of person you meet every day, he was what  people who had an encounter with him would term a ” rare specie”.

The purpose of the above narrative serves to buttress a fact that before you became all that you are today our dad whose words later meant nothing to you had also done something for you in his little corner.

So in the light of the above can you honestly say that you have been fair to the memory of this fine gentleman whom you knew would never do evil to you (except speaking on issues affecting the State) by being the chief pain inflictor on his family? I know in your innocence you may ask how you have done this,

Mr. Governor, you have done it by leveling false accusations against my brother. Who is your brother you may proceed to ask? I am referring to Odudu Ukpanah, the Bsc. Holder in Geophysics from University of Calabar and Msc. in Oil and Gas Management from Coventry University, United Kingdom whom you ordered to be detained unlawfully for a crime he know nothing about.

Sir, the reason i am confident you know he didn’t commit the crime is based on the fact that all the allegations you levelled against him in your video were false, which also resulted in myself and sibling also responding with a video.
http://youtu.be/JALnBQQJA5k
Oh my God, did I fail to mention that he is the only son to your one time political ally Late Engr. Albert Ukpanah.

So back to all the questions I wish you could give answers to:

1. Is it true you ordered the detention of the young lad on the ground that he accused you of masterminding the killing of our dad? If that is the case at what point did he make  this statement? Was it during your condolence visit? If my memory serves me right I have watched the video of that visit on YouTube
AKBC TV Daily News for 21th May 2014 there wasn’t any form of animosity during that visit.

2. If such a man had at a time of need come to you for assistance, was upholding the adage ” a friend in need is a friend indeed” so hard for you, that you would go about telling the whole world our mom has cancer?

If it were possible to slap my dad and wake him from the grave I am certain he would be too afraid to live normally with people as the words of William Shakespeare ” There’s no art to find the mind’s construction in the face” would be a resounding decimal in his ears. Trust me, we would rather not have our hero living in such a manner. But I believe instead of being fearful he would have been a lot more ‘cautious’ which word I don’t think he ever used seriously or he would not be where he is today.

As a Christian hoping to make Heaven, do you think honestly that you have attempted to apply the golden rule of “doing unto others what we expect to be done to you”  in this case? We have more than ever understood the exposure to wickedness and torture widows and fatherless children are faced with. No wonder God had such a group of people covered by stating categorically that HE would be their husband and father, but because we can’t see Him, men have taken His ability to revenge for granted.

As I conclude this ‘ so long a letter’ I add below a picture of your family along side mine just as a reminder that once upon a time, we also had a shield and nobody dared touch any of us while our dad was alive. Today he is no more and this can be your children’s fate in a twinkle of a moment. Do take time after perusing carefully through my letter ( without any atom of anger) and reflect how your children will feel under this kind of enormous suffering and reorder that my brother be released.

Refuse the urge to hide under the fact that the case is already in court as we both know you have constitutional powers to ask the Attorney General to discontinue this case. There is still room for redemption if you choose follow the path that is right.

It’s time to go tend to my mom and give her the much needed love during this period of battling for her life. The campaign for the release of Odudu Ukpanah will not stop until my grieving mom is reunited with her son and his siblings.