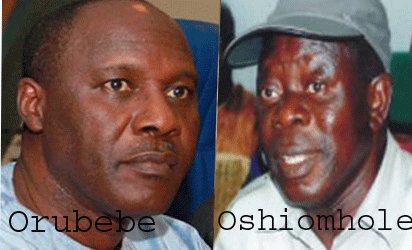 BENIN CITY—GOVERNOR Adams Oshiomhole of Edo State, has described Mr Godsday Orubebe, former Minister of Niger Delta Affairs, as an elevated thug and a political jobber, who is out to make noise as a means of getting his next meal ticket. In a statement by his Chief Press Secretary, Mr Peter Okhiria, the governor in reaction to Orubebe’s fresh attack on him, said: “Reading Godsday Orubebe’s infantile outburst saying that the governor of Edo State is a “garage boy,”  easily exposes the boondocks orientation and lowly mind of someone, who almost plunged the country into political anarchy in the last general election.

But for the maturity and sound leadership orientation of Professor Atahiru Jega, Nigeria would still have been reeking in utter anarchy and political protestations. “With such indecorous conduct coming from a man who ostensibly is an “Elder’ of a Church, calls to question the whole essence of his character, personality, upbringing and spirituality. That singular conduct of his at the election is a living symphony of his egregious blunder, absurdities, incongruities and oddities, all of which are attributes of touts always desirous to make their voices heard.It easily underscores one of the reasons why the Goodluck Jonathan administration failed abysmally to understand the nexus between promise and performance, between problems and solutions, and above all between prosperity and poverty. “Orubebe is no more than a common tout and political thug, too illiterate to know the difference between a “garage” and a “motor park,” recruited by his paymasters as Deputy Director-General of the 2015 Goodluck/Sambo Campaign Organisation, and agent provocateur to truncate the last elections.

“It is due to his amnesia that he forgot to understand that as a Nigerian and Governor of a State, Oshiomhole has statutory right to go in and out of the Presidential Villa to discuss issues that affect Edo State. Former President Jonathan was President of Nigeria and not President of his party, the PDP.  He was under obligation to attend to all parties and persons irrespective of their political affiliation.

“The real problem of former President Jonathan was having people like Orubebe, who pigeon-holed him as president of the Ijaw nation and prevented him from appreciating the enormity of the challenges facing the Nigerian nation. To further compound the challenges was the dénouement of his unruly and thuggish imputation during the elections, such tendentious character index that is now synonymous with this Niger-Deltan.” that notorious script; such a shameless role by a shameless father who was supposed to be a role model for good parenting.”