NewsRescue[Sunday J]- In what can be regarded to be the greatest insult to humanity, the wives of the greatest terrorist of our times, Osama Bin Laden, are to be freed from Pakistan prison this week. The Pakistan authorities sentenced his wives to a 45 day sentence, only for the crime of staying in the country illegally. His wives are to be deported to Saudi Arabia and Yemen, where who knows, they would be lodged in mansions as an even greater reward for their grave atrocities to human existence, just like Osama was living in luxury, next door to a Pakistan garrison till his suspicious death, and hilarious ‘burial with the sharks’. We might just add that the navy seals that ‘killed Osama’ got killed in a copter crash.

Putting it in context. Osama Bin laden is known as the worlds worst terrorist. He has been accused of grave crimes to the people of the world, Christians and Muslims alike. Apart from his alleged role in the USS Cole bombing and the 911 twin tower attacks which led to the deaths of over 3000 Americans, Osama is despised by Muslims world over for single-highhandedly tarnishing the reputation of the religion. Muslims world-over are subjected to insults, undue and extreme clearance checks and travel scrutiny due to the reputation of Osama Bin Laden.

But despite all these, his wives who for several years knew his location, supported him in his plans and missions and aided and abetted him in his grand scheme of evil, are not being held accountable and not being pursued by the International Crimes Court (ICC).

Osama’s wives were clearly co-conspirators, as can be seen in this account from his young Yemeni wife Al-Sada in picture above. She and his other wives knew and hid information about the world’s greatest menace, while interacting openly in the public, they clearly did so in Pakistan and yet are not being punished, though Pakistani people have suffered more than anyone else due to the Osama saga. Destabilized government, daily drone invasions and bombings of militants and civilians alike in Pakistan’s sovereign borders, to mention a little of their reasons for grievance.

Al-Sada’s account says she flew to Pakistan in 2000 and traveled to Afghanistan where she married Bin Laden before the September 11 attacks.

After that, the family ‘scattered’ and she traveled to Karachi in Pakistan. She later met up with Bin Laden in Peshawar and then moved to the Swat Valley, where they lived in two houses.

They moved one more time before settling in Abbottabad in 2005.

According to the report, al-Sada said that two of her children were born in government hospitals, but that she stayed only ‘two or three hours’ in the clinics on both occasions. The charge sheet against the three women says that they gave officials fake identities.

Contrast to Gaddafi whose entire family, the ruling family of Libya, who undoubtedly earned and enjoyed enormous support in Libya and abroad, are being prosecuted for their efforts to keep Libya out of the hands of terrorists from Benghazi whose recent reign has already threatened the entire Sahel region of Africa. Mali has fallen, 4 million blacks in Libya are being deported, some were locked in Libyan zoos under this new NATO imposed terrorist government; and now Chad as well as Algeria and by proxy, Nigeria are on the edge due to the Alqaeda reign in Libya.

Recently in France, the brother of Jewish school murderer Mohammed Merah, was arrested and charged for ‘aiding’ his brother in perpetrating crimes that led to 7 deaths. Now compare this to Osama’s records. Should his wives be rewarded?

As can be seen in the images below, even during their limited sentencing they were hidden away, cozily in this exotic prison-home, or better called, home-away-from-prison:

To make maters worse and even more suspicious, the wives will be returning to the very Saudi Arabia where the the ruling family have been protected by the US government under a so-called ‘sovereign immunity’ status from attempts by the families of the victims of 911 to bring them to court and justice for their role in 911.

So called conspiracy theorists have always argued that Osama was not responsible for 911, and even if he was, he orchestrated this under the approval of the CIA. The reward for his family clearly gives credence to this point of view. It is little surprise that to date Osama’s profile on the FBI most wanted list does not include his being wanted as a suspect in the 911 attacks. Perhaps he did not do it, and his taking the fall for it as expected was with sweet compensation for his kith and kin. 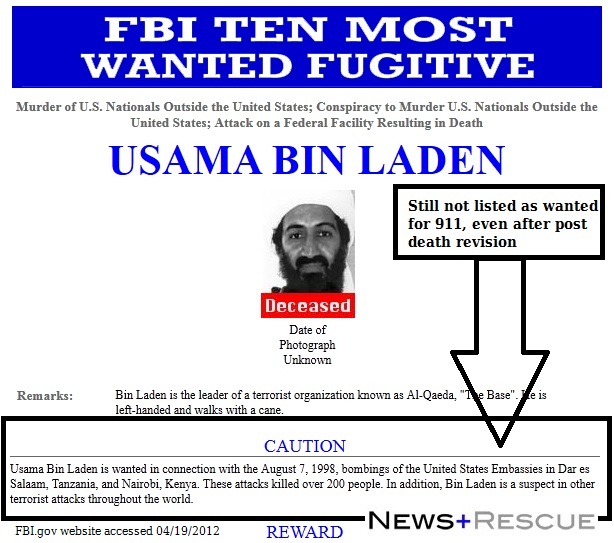