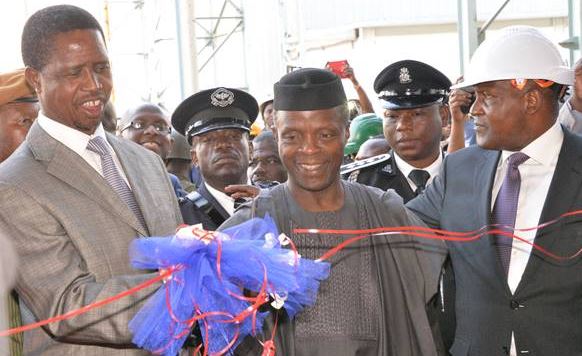 Babatunde Fashola, minster of power, works and housing, says there are aspects of the 2017 appropriation act that violate the constitution, suggesting that the judiciary may have to explain how far lawmakers can go in altering the budget.

Acting President Yemi Osinbajo had questioned the extent of changes made to the 2017 appropriation bill by the federal lawmakers, who replied that the national assembly acted within the law and is not a rubber-stamp body.

But in an interview with TheCable at the weekend, Fashola said there may be need for judicial interpretation to lay the controversy to rest, pointing out that some of the projects included in the budget of his own ministry were a violation of the constitution.

“In a federal example like ours, nobody should be scared to have a judicial interpretation of the limits of the power the parliament can exercise during appropriation,” he said.

“It is the law that affects our day-to-day developmental expectations. My view is that I don’t think parliament has the power to increase the budget because parliament does not collect taxes. Budget has expenditure as it has revenues, and if executive has formed the view about earning and borrowing subject to the approval of the parliament, I think it is only fair to say we won’t push you beyond what is reasonable. If executive says it is unreasonable, there is room for consultation but to unilaterally increase the budget is not something that lies in the power of the parliament, although they can reduce it.”

The former governor of Lagos state, who is a senior advocate of Nigeria (SAN), said the issue of separation of power should not be taken out of context, maintaining that the three arms of government are “inter-dependent” and no arm can be absolutely independent, if not the business of government will never be carried out.

Fashola said: “I don’t think that they can sit down and legislate projects that are not federal projects, that would be doing violence to the constitution because there are three levels of government. The local and state governments have their responsibilities and the federal government should be building federal roads not state roads.

“In my budget, you will find things like motorised boreholes, primary health care centres. That is a violation of the constitution, it shouldn’t be in the appropriation law of the federal government. If the judiciary decides that it is the national assembly that should make the budget and hand it over to the executive to implement, so be it.”

He said he cannot argue “fairly” that a legislator has no input to make into the developmental plan of a nation “but the question is how and when”.

“I had cause to appear before the committee of the house of reps and I even presented a paper at their invitation because they were planning to pass a constituency project law and they were doing a hearing on the bill and they were planning to create constituency offices and I said they shouldn’t do it, it’s not necessary because there are institutional capacities within our national framework for this kind of thing,” he said.

“When the president submits the budget and these committee hearings start, everyone is excited and we are going from one committee room to the other, you’ll wonder what we were doing then. That is the place I expect that issues about projects that affect constituencies to be brought up but the issues to be taken on must be federal issues.

“A federal legislator’s constituency project must be a federal matter otherwise you’ll be encroaching into the territory of the state legislator, that is my argument.”

Fashola said a lot of money is spent on those committee hearings only for the outcome to be significantly different from what was agreed upon.

“They provide water, snack, media coverage and various things, that is tax payer’s money being spent. After all of that, you expect everything to be fine and that all of the things that you have discussed will be reflected in the output of the budget,” he said.

“What happens is that there is another committee called the appropriation committee and I don’t know how they brief each other but when your budget returns, it is different from the budget that you discussed and defended. You don’t recognise it anymore.

“When I was defending my budget, we didn’t discuss boreholes or primary health care centres, now I have hundreds of them in my budget. I have new roads that are state roads, I inherited over 200 roads when I became minister that we are trying to complete and even the right to add something must be in a context of our national development.

“We have reports from previous administrations that there are thousands of uncompleted projects in Nigeria. Those projects must affect constituencies and those are what we want to focus on and complete those that have started. Some of the roads don’t have a design so they can’t be built this year. What I would have suggested if they were federal roads is that the contract for their design be awarded so that next year, we can award them and start building”.

He advised that the outcome of committee hearing be summarised into a one or two-paged communique so that they form part of the documents that are submitted to the appropriation committee “so that if any new issue arises, it is only fair to call the ministry back to say we want to do this. It is unfair after defending your budget that the committee unilaterally decides to chop off this and that and apply it to areas that were not previously discussed with you, without considering if you have the manpower to do it”.

Editor’s note: The full text of the interview will be published on Tuesday.