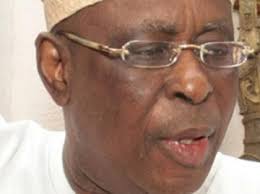 Plans have been concluded for former Governor of Ogun State and Chieftain of the All Progressive Congress, Chief Olusegun Osoba, to defect from APC and unveil his new political party.

Though unconfirmed, our source revealed that Osoba is presently in Abuja to perfect the registration of the new political party and is billed to return to Abeokuta this weekend.

Osoba is known to have a formidable structure in Ogun State as his loyalists constitute some members of the state House of Assembly, some House of Representative members and the three senators while Governor Amosun’s strength lies in the grassroot.

Reacting to this, a top party member who spoke under the condition of anonymity said Osoba’s action is a matter of his principle and belief.

His words: “The day Chief MKO Abiola died, Chief Osoba would have been mobbed but for the intervention of people, he was whisked away. He was accused of rubbing minds with military junta of Abacha. Most people do not see him as a true democrat.

“Now again, for eight years when Gbenga Daniel was governor of Ogun State, he could not go to Ogun State but save for Asiwaju Tinubu. Osoba lived all his eight years in Lagos under the protection of Asiwaju Bola Tinubu.”