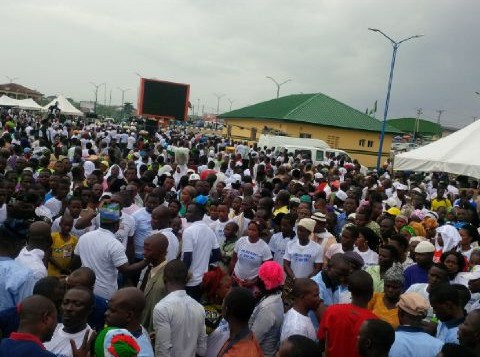 Ahead of the August 9 governorship election in Osun State, youths under the auspices of the All Progressives Youth Forum (APYF), the largest and most formidable youth group in the All Progressives Congress (APC), yesterday staged a ‘one million’ youth rally in Oshogbo to drum up support for the re-election of the state governor, Rauf Aregbesola.

The youths who wore T-shirt with the inscription “1,000,000 march 4 Aregbe” and the APYF logo pasted on the front and “RAUFOMANIA” at the back walked through major streets of the state capital to show their support for Governor Rauf Aregbesola.

The motorcade with music in support of Aregbesola blaring from speakers mounted on trucks rented the air as it moves from Orita- Elelede to Abaaku- Ayetoro- Igbona- Ajegunle and the convoy later stopped at the Nelson Mandela Freedom park.

The march tagged “one million march for Aregbe”? had members of the forum from all the 30 local government areas of the state and well as people from all works of life in attendance.

In his address, the National Chairman of the orum, Barrister Ismail Ahmed, said the APYF decided to come to Osun to remind the people that the governor deserves another term in office.

“We are here today to remind the good people of Osun that come Saturday no amount of intimidation or falsehood should deter them from exercising their democratic franchise and keeping the State of Osun with the best Governor in Nigeria.”

“Rauf has done well for the Youths and younger generation in this great state. His scholarships, his reduced tuition fees for students, his employment opportunities scheme, his emotional patriotism in building a wonderful camaraderie with the people”

“So we will be at attention at every polling station,  in every ward, every local govt. We will win this election by a landslide. We will keep this state away from the clutches of the inept, Ahmed said.”

Governor Aregbesola while thanking the youths of the All Progressives Forum (APYF), for staging the march stressed that what he has done in his 4years in office is just a tip of the ice-berg.

He held that he will be launching a mini bus assembly plant among others that he has done is enough for him and that he is happy that people is happy with the development in the state.

In his words, ”I am very happy that youths actually identify with us, any government who do not recognise the important of youth is a government that has no reason to be in government. My own understanding of power is responsibility.

“All what we are doing in Osun has not been done before now, God through us has brought a lot of industries to the state. What we’ve done in our first term that you are happy about, will not be able to compare what how second term will witness in ter?ms of development”. The governor told the gathering.