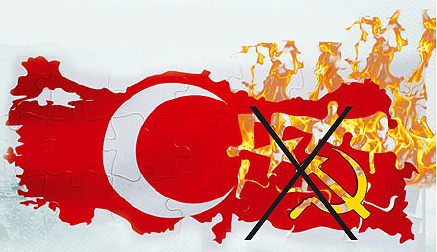 The deep states of the USA and Europe have been dreaming of establishing an independent Kurdistan in the Middle East for the last 100 years. In order for that state they dream of to come about, the Southeast of Turkey needs to break away from our homeland. The PKK, a communist terror organization, is a group that these secret structures in question are using to that end.

Every stage of this dream, which the Turkish nation will never allow to happen, has been planned in detail. According to this plan;

AN INTELLECTUAL STRUGGLE AGAINST THE PKK IS THEREFORE ESSENTIAL TO PREVENT THE MIDDLE EAST FROM DROWNING IN  BLOOD!

First and foremost, the PKK is not the representatives of our Kurdish brothers. The Kurds are devout, well-mannered and virtuous people. The PKK, however, is irreligious, Godless and rejects the concepts of moral virtue and the family. It is impossible for the immaculate Kurdish people to support the terrorist PKK.

It is unacceptable to leave the needs and rights of the people in the region at the mercy of a despotic and aggressive organization such as the PKK on the pretext of strengthening local administrations.

The PKK is a Marxist-Leninist, Stalinist organization and as a prerequisite of its ideology, it permits no structure that thinks any different. This will make it impossible for any other party or civil society organization to operate in the region. The PKK will deny the right to life and existence to those who now forcefully speak of releasing Öcalan, establishing local assemblies and autonomy, and will ruthlessly crush them all.

Bearing this in mind, our state must take a firm stand against all proposals, particularly those that demand the release of Öcalan and autonomy- which would leave our Kurdish brothers at the mercy of the PKK.

No good conscience would ever find it acceptable to abandon the Kurdish people, who were ruthlessly kept down by the alleged organization Ergenekon for decades, to an oppressive Marxist-Leninist, Stalinist regime instead.

The deep states of the Western countries are no friends of the Kurdish people. The way that these bodies, which for decades watched as Saddam and Assad persecuted the Kurds, now appear to be supporting them is deceptive. These circles’ sole aim is to protect the Godless, Bookless PKK and use it to establish an independent communist Kurdistan in the region.

All countries of the region must be on their guard against this stratagem. This plan to set Muslim against Muslim can be thwarted only by fully embracing the Qur’an, through Islamic Unity and the system of the Mahdi. By the leave of God, this is the century in which the PKK will be consigned to the dustbin history and the Truth will prevail.