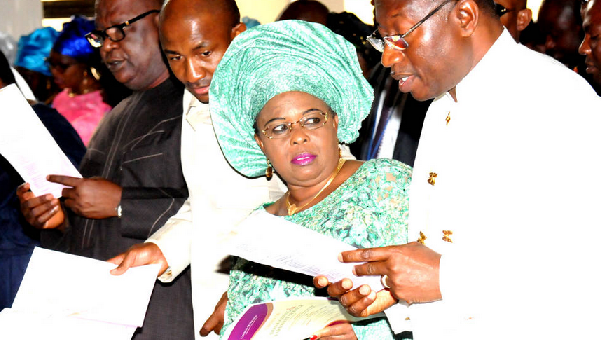 President Goodluck Jonathan on Sunday gave an insight into the fate that awaits him under the incoming government of the President-elect, Gen. Muhammadu Buhari (retd.), saying he and ministers as well as other aides who served under him would be persecuted.

He said he and his ministers would have hard times because of some critical decisions they took while in office.

Jonathan also looked back at all the benefits that had come his way as a Nigerian, saying he was ready to pay the supreme price for the nation.

The President spoke at a thanksgiving and farewell service organised in his honour at the Cathedral Church of the Advent, Life Camp, Gwarinpa, Abuja.

Jonathan who was accompanied by his wife, Patience, said considering what God had done in his life, he wished he could dance like the biblical King David but he kept missing his steps whenever he made attempts.

He said only a few Nigerians within his age bracket were as lucky as he is because he had not suffered any lack, not because he is hardworking but by the grace of God.

He said after reflecting on the benefits which included the scholarships he enjoyed in school and the various political offices he had occupied, he should be able to do anything in the interest of the country, including paying the supreme price.

He added that he is leaving office of the President as a fulfilled and very happy man.

Jonathan said, “I want to thank God for what he has done for me and my family. I wish to dance more than David, if I tried to dance, I missed my steps.

“I have all the reasons to thank God. Very few of those in my age brackets have been that lucky. All through my education I was on government scholarship. I have not suffered lack not because I am hardworking, but by God’s grace.

“When I look at the whole picture of my life up to when I became the President of this country, I say that if soldiers and police officers that have not received 0. 5 percent of the benefits that I have received from the state can lay their lives for this country, I should do anything in the interest of Nigeria, including paying the supreme price.

“As long as live, I will continue to do my best for the state because the state has helped me as a person.

Saying that hard decisions have their own cost, Jonathan said he was ready to pay for some of the costly decisions he took while in charge of the country.

He said experience had shown him that people would at a time desert anybody who takes tough decisions like he did.

He said he had always hold the belief that more of his friends would desert him as time goes on.

He recalled the story of the last ruler of apartheid South Africa who was divorced by his wife for accepting to abolish minority rule in the country, and said jokingly that he hoped his wife will not also divorce him after he might left office.

Mrs. Jonathan replied with a shout of “Nooooo”.

Her response was greeted with a loud applause by congregation members.

The President also prepared the minds of the ministers and aides who served under him, saying though times await them all.

He said, “I believe there are reasons for everything. Some hard decisions have their own cost, no doubt about that.

“That I have ran the government this way that stabilised certain things, the electoral process and other things that brought stability into this country. They were very costly decisions which I myself must be ready to pay for.

“Some people come to me and say this or that person, is he not your friend that benefitted? Is it not your government that this person benefitted from? But this is what the person is saying.

“But I used to say that worse statements will come. If you take certain decisions, you should know that those close to you will even abandon you at some point.

“And I tell them that more of my so-called friends will disappear. When FW De Clark took the decision to abolish minority rule in RSA, even his wife divorced him. I hope my wife will not divorce me. But that is the only decision that has made RSA to still remain a global player by this time. If we still had that minority rule there, by this time, nobody will be talking about RSA.

“If you take certain decisions, it might be good for the generality of the people but it might affect people differently. So for ministers and aides who served with me, I sympathise with them, they will be persecuted. And they must be ready for that persecution.

Jonathan however said he was happy that the ordinary people appreciate what he did and that, according to him, is the most important.

He said it was not what the elite or the privileged few talk or say about his administration that matters but what the majority of the Nigerian public think about his actions and inactions.

He expressed delight that he came to Abuja with his family peacefully and they are returning peacefully.

The President thanked the church and Nigerians for standing by him even at his most difficult times.

He said even on the March 28 presidential election which he lost to Buhari, there were many people who supported him nationwide.

Despite exiting the Presidential Villa, Jonathan promised that he would continue to pray for the country and the Buhari administration.

He said the outcome of the election went that way because God wanted it to be so for a purpose.

“Even for the election, we had people who supported us all over the country but things went the way they did because God wanted it that way for a purpose.

“We will continue to pray for the peace of the country and for the success of the incoming administration.

“When the country is in good shape, people benefit. When things are going well, people are happy. You don’t need to know Mr. President or Mr. Governor.

“The issue is not about Jonathan or Buhari or any other person. The issue is how the government functions: stability, buoyant economy that will enable Nigeria to move forward and live happy. That is our interest, that is my prayer point.

“All religious groups should pray for the country,” he concluded.

Jonathan thereafter requested that his favourite him, “Stand by me” be sung again.

He said apart from inspiring him, the hymn makes him aware of the fact that whatever one does there will be storms.

He said the assurance in the hymn was that once such a person means well for the people, God will always stand by him.