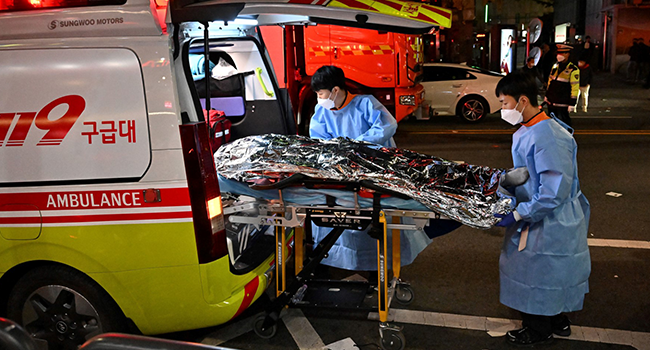 More than 140 people were killed Saturday and some 150 were injured in a horrific stampede in central Seoul when a large crowd celebrating Halloween crammed into a narrow street, officials said.

AFP photos from the scene showed scores of bodies spread on the pavement covered by bed sheets and emergency workers dressed in orange vests loading even more bodies on stretchers into ambulances.

The stampede took place near the Hamilton Hotel in the nightlife district of Itaewon where a large number of people entered a narrow alley near the hotel.

Fire Department official Choi Seong-beom said the stampede occurred around 10:00 pm (1300 GMT) and many of the victims were trampled to death.

“The high number of casualties was the result of many being trampled during the Halloween event,” Choi said, adding that the death toll could climb.

In an interview with local broadcaster YTN, Lee Beom-suk, a doctor who administered first aid to the victims described scenes of tragedy and chaos.

“When I first attempted CPR there were two victims lying on the pavement. But the number exploded soon after, outnumbering first responders at the scene,” Lee said. “Many bystanders came to help us with CPR.”

“It’s hard to put in words to describe,” he added. “So many victims’ faces were pale. I could not catch their pulse or breath and many of them had a bloody nose. When I tried CPR, I also pumped blood out of their mouths.”

“People were layered on top of others like a tomb. Some were gradually losing their consciousness while some looked dead by that point,” the witness said, according to Yonhap.

‘Hoping for a quick recovery’

Choi said the victims’ bodies are being transferred to a gym not far from the site of the stampede to be identified.

Local television showed scores of ambulances streaming to the Soon Chun Hyang University Hospital, where some of the victims had been taken.

Officials had said earlier that 50 people were in cardiac arrest and that more than 140 ambulances were dispatched to the scene to aid the victims.