NewsRescue– We at NewsRescue believe that the Pakistani Imam, Khalid Jadoon Chishti, who stands accused of fabricating blasphemy evidence against a Christian, that could have led to her death, should receive the maximum punishment of blasphemy.

Since the punishment for this crime is so grave, if such a law is to be upheld in Pakistan, clerics and any other person who might wish to frame an innocent individual for this offense must know that if caught they will receive the punishment they wished and planned on the innocent victim.

The punishment for blasphemy in Pakistan ranges from life in jail, with fines to a death sentence.

According to reports from Pakistan, the cleric was only jailed for 14 days. We are watching the story and hope that if confirmed guilty, this very wicked individual does get nothing less than the punishment he planned for the victim. We would like to read our readers views and perhaps if need be, initiate a petition. 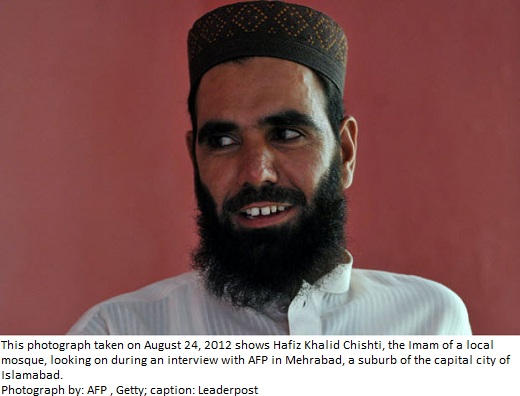 Here is the latest on the story from CNN:

Islamabad, Pakistan (CNN) — Pakistani police say a Muslim cleric planted evidence to link a Christian girl to blasphemy — a new twist in a case that has fanned flames of religious tension in the country and attracted worldwide interest.

The imam, Khalid Jadoon Chishti, will himself face blasphemy charges for tearing pages out of a Quran to use as evidence against the girl, Islambad police chief Bin Yamin said.

The latest development may make it easier for the girl, 14-year-old Rimsha, to be released on bail at her next court hearing.

Police arrested Rimsha last month after a neighbor accused her of burning pages containing texts from the Muslim holy book, the Quran.

Rimsha had two shopping bags with her: one containing ashes and the other, the partially burned pages, police said. She had gathered the paper as fuel for cooking, authorities said.

Even though Rimsha’s lawyer said no one actually saw the girl burning the papers, the neighbor went to Chishti — the neighborhood cleric — with the bags for safekeeping as evidence.

Chishti wasn’t certain that simply burning pages with texts from the Quran would be enough to convict Rimsha on blasphemy charges, said Munir Jaffery, the investigating officer in the case.

So, the imam added two pages from the holy book itself to the bag to bolster the case, Jaffery said.

Police arrested Chishti on Saturday after three witnesses told a judge about the imam’s actions.

He was sent to jail for 14 days, accused of evidence tampering.

Sources said that Hafiz Muhammad Zubair, who witnessed Chishti adding pages of the Quran, recorded a statement before the magistrate on Saturday.

According to Zubair’s account, Khalid Chishti was sitting in Iteqaaf in the mosque when some people handed over some burnt pages to the prayer leader. After a little while, Chishti added additional pages of the Quran to the pile.

Zubair, in his statement, added that three other people present with him in the mosque asked Chishti why he was adding documents to the pile of burnt paper, to which the prayer leader said that such an act was necessary to strengthen their case. Read more

Yamin, the police chief, drew a distinction between the accusations against the two, saying Rimsha is a simple-minded minor, while the imam is highly educated in religious studies and indulged in the act of blasphemy willfully.

Insulting Islam provokes widespread and immediate reaction in Pakistan, a predominantly Muslim nation. Its controversial blasphemy law makes the crime punishable by death. Critics have said the legislation is being used to entrap minorities.

Punjab Gov. Salman Taseer, who criticized the law, was shot to death by his security guard last year. A Pakistani court then suspended the guard’s death sentence.

In Rimsha’s case, about 150 people gathered on August 17 — the day she was arrested — in the area where the neighborhood’s Christian population lives and threatened to burn down their houses, police said.

Her relatives have gone into hiding.

During a tense hearing Saturday, Muslim lawyers demanding that Rimsha remain in jail got into a shouting match with the judge. They provided a list of reasons the girl should be detained, including questioning whether the girl gave her lawyer the power of attorney.

A judge ordered investigators to get more details on her power of attorney and postponed the hearing to Monday.

Before Saturday, a decision was supposed to come Thursday, but was deferred so authorities could answer questions about her medical history.

“All these are the delaying tactics by the lawyers of the complainant to keep the girl in jail,” said her lawyer, Tahir Naveed Choudhry.

Her lawyers dashed into a car and sped off after the hearing Saturday for safety reasons. Rimsha did not attend.

Pakistani authorities have come under pressure to guarantee Rimsha’s safety amid concerns that if she is released on bail, angry Muslims will seek retaliation.

Choudhry has sought bail, saying she is legally a minor and should be reunited with her parents rather than kept in a jail with adults.

He cited a report by an independent medical board stating that the girl is 14. The doctors who examined her also concluded that her mental age was lower than her chronological age and she suffers from Down syndrome, he said.

Police have said the girl is illiterate and denied knowing there were Quran verses on the documents she allegedly burned.

Choudhry says he expects the trial to last as long as two years. Rimsha would remain in custody for its duration if bail is denied, he said.

If she is tried as a minor, she might receive a milder sentence if convicted. As an adult, she faces a maximum sentence of life in prison for blasphemy, the lawyer said.

The imam’s arrest may prompt a reexamination of the allegations against the girl, authorities said Sunday.

“We have strong evidence against (the cleric),” said Naveed Chaudhry, an adviser to Pakistan’s president. “(Rimshi’s) lawyer is going to court for bail. She might be released by Monday based on this evidence.”