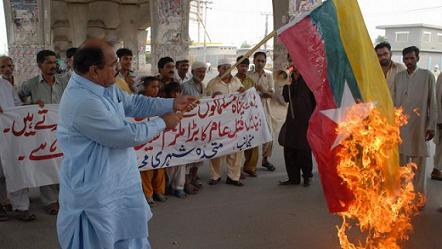 People in different Pakistani cities have staged protest rallies to voice their outrage at the ongoing violence against the minority Rohingya Muslims in Myanmar, Press TV reports.

The protesters took to the streets on Friday shouting slogans against the Myanmar’s administration for its role in the persecution and massacre of Muslims.

They also lashed out at Western media and the UN Security Council for turning a blind eye on the killing of Muslims during a recent wave of sectarian violence in the Southeastern Asian country.

The UN says decades of discrimination have left the Rohingyas stateless, with Myanmar implementing restrictions on their movement and withholding land rights, education and public services.

Reports say some 650 Rohingyas have been killed and thousands more displaced in recent months.

The Pakistani demonstrators further called on Islamabad to sever diplomatic ties with Myanmar and expel its ambassador from the country over the Myanmarese government’s discrimination against Rohingya Muslim minority.

The government of Myanmar refuses to recognize Rohingyas, claiming they are not native to the country. This is while the Rohingyas migrated to Myanmar as early as the 8th century.

On Wednesday, Human Rights Watch (HRW) condemned the Myanmar government for the killing of Rohingya Muslims.

“Burmese (Myanmarese) security forces committed killings, rape, and mass arrests against Rohingya Muslims after failing to protect both them and Arakan Buddhists during deadly sectarian violence in western Burma in June 2012,” the rights organization said in a report.