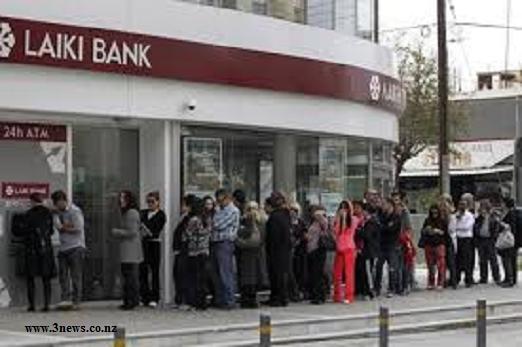 European officials are openly admitting that the two largest banks in Cyprus are “insolvent“, and it is now being reported that Cyprus Popular Bank only has “enough liquidity to cover the next few hours“.  Of course all banks in Cyprus are officially closed until Tuesday at the earliest, but there have been long lines at ATMs all over Cyprus as people scramble to get whatever money they can out of the banks.  Unfortunately, some ATMs appear to be “malfunctioning” and others appear to have already run out of cash.  You can see some photos of huge lines at one ATM in Cyprus right here.  Some businesses are now even refusing to take credit card payments.  This is creating an atmosphere of panic on the streets of Cyprus.  Meanwhile, the EU is holding a gun to the head of the Cyprus financial system.  Either Cyprus meets EU demands by Monday, or liquidity for the banks will be totally cut off and Cyprus will be forced out of the euro.  It is being reported that European officials believe that the “economy is going to tank in Cyprus no matter what“, and that it would be okay to let the financial system of Cyprus crash and burn if politicians in Cyprus are not willing to do what they have been ordered to do.  Apparently European officials are very confident that the situation in Cyprus can be contained and that it will not spread to other European nations.

Unfortunately, European officials are losing sight of the bigger picture.  If the largest banks in Cyprus are allowed to fail, it will be another “Lehman Brothers moment“.  The faith that people have in banks all over Europe will be called into question, and everyone will be wondering what major European banks will be allowed to fail next.

Meanwhile, European officials have already completely shatteredconfidence in deposit insurance at this point.  Everyone now knows that when there is a major bank failure that depositors will be expected to share in the pain.  Expect to see “bank jogs” all over southern Europe over the coming weeks.

The banks in Cyprus had been scheduled to reopen on Tuesday, but very few people expect that to actually happen at this point.  In fact,Bloomberg is reporting that EU officials are actually thinking about shutting down the two biggest banks in Cyprus and freezing their assets…

Finance ministers for the 17 euro countries are considering a plan to shutter the two biggest banks in Cyprus and freeze the assets of uninsured depositors, said the four officials, who asked not to be named because the talks are ongoing. The ministers are holding a teleconference tonight.

Cyprus Popular Bank Pcl (CPB) and the Bank of Cyprus Plc would be split to create a so-called bad bank, one of the officials said. Insured deposits — below the European Union ceiling of 100,000 euros ($129,000) — would go into a so-called good bank and not sustain any losses, while uninsured deposits would go into the bad bank and be frozen until assets could be sold, said the four officials.

Losses to unsecured creditors, including uninsured depositors, could reach 40 percent under the plan, which has support from the International Monetary Fund and the European Central Bank. The proposal, a version of which was rejected last week, is considered a better option than taxing insured deposits or allowing Cypriot banks to collapse in a disorderly fashion if they lose access to ECB aid, the officials said.

Such a scenario would be an utter disaster.

How would you feel if you woke up someday and 40 percent of your life savings was suddenly gone?

According to Greek newspaper Kathimerini, European officials are also openly discussing the possibility of a Cyprus exit from the eurozone if a suitable bailout agreement is not worked out…

The possibility of Cyprus exiting the eurozone was discussed during teleconference involving technocrats from the Euro Working Group on Wednesday, Kathimerini understands.

A reliable source told Kathimerini that the technical implications of a euro exit, as well as the adoption of capital controls were debated by the Euro Working Group officials during the teleconference.

As I mentioned above, European officials seemed resigned to the fact that there will be an economic collapse in Cyprus “no matter what”, and so letting Cyprus leave the euro would not make that much of a difference.  Either way, the banks are going to have to be “reorganized” and capital controls will be imposed… Read more…