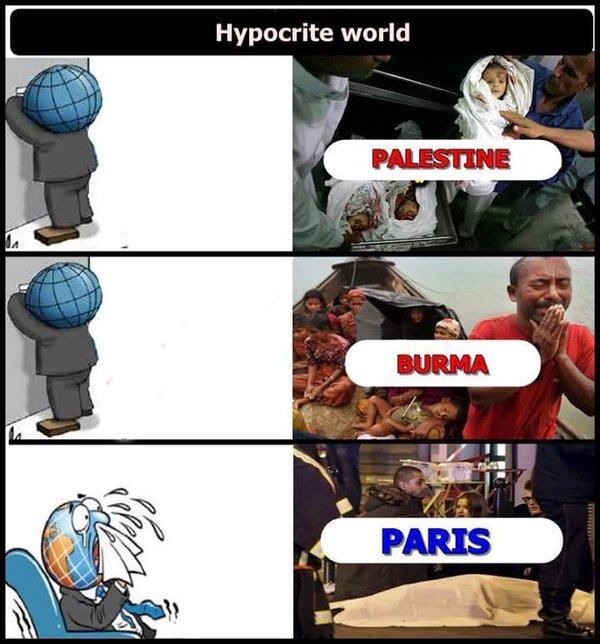 In a reaction to the gruesome terror acts that left at least 129 dead and 352 injured in Paris, Howard Schmitt wrote a letter to the editor of the New York Times echoing the sentiments of many peoples of the world on United States’s foreign policy.

“The attacks in Paris serve to demonstrate how our misguided policies in the Mideast have disastrous consequences. Saddam Hussein and Muammar el-Qaddafi were demonstrably no threat to the United States,  yet we overthrew one and aided in the overthrow of the other. The result is chaos, and a breeding ground for nihilistic terrorism.

“We appear to have learned nothing, as we are busy creating the same situation in Syria. We keep insisting that Bashar al-Assad cannot remain in power, without giving a reason as to how he threatens the United States. Now ISIS controls vast areas, and it obviously does constitute a direct threat, in addition to being responsible for the awful flight of refugees from its horrors.

“If the choice is between leaving Mr. Assad in place and letting ISIS have free rein, it seems eminently sensible to come to terms with Mr. Assad instead of continuing the idiotic policies of the last 14 years.”

Mr. Howard, just like many Americans’ condemnation of the senseless killings did not prevent him from letting his government know that her acts of aggression in the middle east was chiefly responsible for the growth of terrorism and continued hostility between the Arabs and the West, the US especially.

While the westerners largely come to terms with this fact, Nigerians who continue to die every second from the sordid activities of Bokoharam rushed to show solidarity to the French.

It is not the public show of brotherhood that bothers me as the death of any individual – however lowly in status or nigrescent in colour, especially in acts of violence and terrorism – elicits sympathy from any rational being. As Elie Wiesel puts it in his 1999 address: “In a way, to be indifferent to that suffering is what makes the human being inhuman…and therefore, indifference is always the friend of the enemy, for it benefits the aggressor; never his victims, whose pain is magnified when he or she feels forgotten.”

Although not mutually exclusive, the Paris attacks and Nigerians scramble to express solidarity would have been heartwarming had a sizeable portion of these individuals not been the same people that ridiculed the #BringBackOurGirls campaign. When the 276 girls were abducted from Chibok over a year ago, the whole world heard our cry; we saw Michelle Obama holding the #BBOG slate, and some other notable figures sympathising with the families of the victims.

But back home, the movement created a sharp divide among Nigerians as only a tiny fraction saw the sordid abduction strictly as a crime that requires us all to rally together irrespective of political leaning or ethnic affiliation; but this is Nigeria. We quickly made the abduction kernel to politics. We played APC with it. We played PDP with it. A bulk of the PDP sympathisers labeled the campaign a ruse, created solely to rubbish the inept administration of Dr. Goodluck Jonathan. We spat on the hashtag. We rushed to paint facebook blue, white, red on Friday but cursed twitter for allowing Oby Ezekwesili the platform to call the attention of the world to the plight of our sisters in the north.

A cursory look at Howard’s assessment of western foreign policy leaves one with no choice other than to take a deep look at what constitutes terror. Why was the 2001 attack on the world trade centre an act of terror and that of the Soviet Union on Afghanistan not? Why was terrorism invoked on the inhumane shootings in Paris but not on the US-led invasion of Iraq on the premise of a nonexistent weapon of mass destruction?

This should give us a direction:

Whenever Nigerians discuss dictatorship, you’ll see the agony on their faces and pain in their hearts. Murder, torture, embezzlement of state funds, cronyism, are all what we’ve tasted in the hands of the military.

General Buhari has always been indicted at one point or another in all of these claims except one: embezzlement (integrity). Anywhere the man goes, that has always been his selling point.

Countrymen understood that he was not a Goat in 2011.

In all of these instances, we understood quite well the importance of electing a credible candidate and worthy ambassador, yet spat on his candidacy majorly because in both posture and utterance, he represented our two most loathsome qualities. First, he was a practicing Muslim and secondly, an unapologetic Northerner.

It was not until we elected the worst of us with the worse spouse that the non-Hausa broke-off from the shackles of tribalism, the non-Muslim from the chain of religionism, and the liberal Muslim from the prison of what they call Islamic fundamentalism.

It was hunger that broke the chains.  It was when we felt extreme poverty and democratic humiliation like never before that we began a fresh appraisal of the “Daura demon.”

The same fate will befall our choice of terror application and usage. The same fate will instigate a removal of the seal that makes us quick to #PrayForParis at the unfortunate death of 129 while we shout “the northerners are the ones killing themselves” when BokoHaram massacred at least a thousand in Baga.

It is because we’ve never been invaded. If we had – like the Libyans, the Iraqis, the Afghans, the Palestinian – no one would prompt us to recognise that the terror of ISIS is the same as that of NATO; and killings by Bokoharam is exact as the invasion of a sovereign land by any other.

We curse the Bokoharam because they’re making our lives unbearable. They bomb us. They kill us. They rape us. That’s why we call them terrorists.

Oh yes, they are.

As a young Nigerian and an advocate of nonviolence, I still find it difficult to understand why the continued occupation of Gaza was humanitarian while the 2009 bombing of the Flotilla ship by Isreal was not an act of terror. For several weeks, Vladimir Putin of Russia has been bombing the hell of out ISIS while the west folds its hand, waiting to topple the number one enemy of ISIS, Bashar al-Assad. The ISIS which the west saw as less a priority has now proved to be a greater threat to world peace than the Syrian dictator.

A couple of weeks ago, a former British prime minister, Tony Blair in an interview confessed that the logic for the decimation of Iraq was flawed; yet these humanitarians neither created #CurseTonyBlair nor painted their facebook with an Iraqi flag. If the same man came to Nigeria, we would roll a red carpet for him to gallivant on. It makes a mockery of us if hashtag is made an exclusive preserve of the Slavemasters!

It’s not until a white man is killed that the word “terror” is invoked. It should be when any man is terrorized and any people is faced with a threat of annihilation. The double standard and hypocritical stand of the world to organized terror have dragged us this far into the cesspit of fear and horror.

Until we begin to confront western aggressions in a similar manner we do when the babarians (BokoHaram, ISIS, etc) strikes, our clamour to live in a peaceful world would remain a mirage.

I hope the West never remember us. The day they do, our dictionary of terrorism will quickly accommodate them.

He shares his thoughts on www.ghettosassembly.wordpress.com.