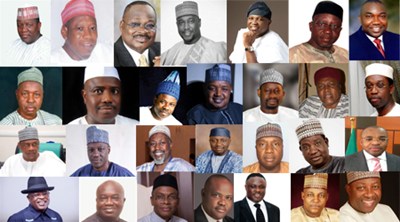 Governors of Nigeria’s 36 states have threatened to declare war on the Acting Chairman of the Economic and Financial Crimes Commission (EFCC), Ibrahim Magu, over what they described as “unwarranted attack on the Nigeria Governors’ Forum, its officials and associated entities,” presidency officials familiar with the matter have told PREMIUM TIMES.

The EFCC has in the past weeks been investigating the governors’ handling of the Paris Club refund made to states by the Federal Government, and has invited officials of the Nigeria Governors’ Forum (NGF) secretariat over the matter.

The anti-graft commission accused the governors of making some unclear payments to consultants which helped the NGF in computing and negotiating the refund due to each state of the federation.

The EFCC also blocked an Access Bank account belonging to the NGF, a development that led the Forum’s chairman, Governor Abdulaziz Yari of Zamfara, to storm the presidential villa to protest, our sources said.

Our sources said the meeting between Mr. Yari and Acting President Yemi Osinbajo held on January 30.

“The governor met Vice President Osinbajo saying he has the mandate of his colleagues to request him (the VP) to call Magu to order or that the governor would do all they can to defend their integrity and that of their states,” one of our sources said.

“The governor said should Magu continue to harass the NGF, the 36 governors would strike in a way never seen before.”

Mr. Yari was further quoted as telling Mr. Osinbajo that Mr. Magu had in the past weeks subjected officials at the NGF secretariat to “harassments and ceaseless interrogations.”

“We have done nothing wrong and we view this onslaught on the NGF as a fishing expedition designed to embarrass, humiliate and insult the 36 governors for perceived or imaginary wrongdoing,” the Zamfara governor is quoted as saying.

“We urge urge you to call him to order or we will fight back whichever way we can.”

“The right to engage staff and other experts and professionals to carry out work on behalf of the governors is within the purview of the NGF and we are hard put explaining the current development.

“We fear that the harassment has gone on for too long without any signs of abating and we are urging you to call this man (Magu) to order and desist from any further harassment of our officials and consultants.”

In his response, the acting president was said to have thanked Mr. Yari for calling his attention to the matter and pleaded with him and his colleagues to be patient while he looked into the matter.

PREMIUM TIMES however learnt that the governors are not taking the matter lightly, and have fixed a general meeting for Wednesday in Abuja.

Laolu Akande, the spokesperson for Acting President Osinbajo could not be reached to comment for this story.

But the Director General of the NGF, Asishana Okauru, confirmed that Mr. Yari recently met Mr. Osinbajo over the matter.

“I don’t know the details of their discussion, but I am aware the two leaders met,” Mr. Okauru said. “I am also aware that the governors are very angry with what appears a deliberate attempt by the EFCC and its leadership to malign them and to feed the media with misinformation.”

Mr. Okauru said contrary to reports, he was never arrested over the matter at anytime, but that he willingly responded to enquiries by EFCC operatives.

The spokesperson for the EFCC, Wilson Uwujaren, declined to comment saying he was not aware of the meeting between Mr. Yari and Mr. Osinbajo.

Mr. Uwujaren however later issued a statement saying the EFCC investigation on the matter was still at a preliminary stage and that no governor had so far been indicted.