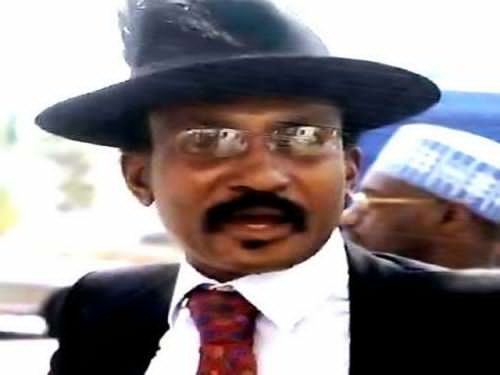 The presidency has condemned a recent statement by a retired colonel, Dangiwa Umar, against the ongoing anti-corruption campaign of the Muhammadu Buhari administration.

A presidential spokesperson, Garba Shehu, made the condemnation in a statement issued in Abuja on Monday.

Mr. Shehu was reacting to a statement issued by Mr. Umar in which he accused the government of President Muhammadu Buhari of being unfair in the war against corruption.

In his statement on Sunday, the retired colonel commended President Buhari for suspending two officials enmeshed in scandals, but criticised other actions of the administration.

“The decision by the Federal Government of Nigeria to suspend the SGF Mr David Babachir Lawal and the DG NIA Mr Ayodele Oke while they are being investigated is a welcome development in its war against corruption,” Mr. Umar said. “It is also remarkable and commendable that the Government has decided not to detain the duo while they are being investigated.”

“The only explanation one can find for Col. Dasuki’s lengthy detention without trial is that he belongs to the wrong camp. He has also the misfortune of having served as National Security Adviser to the much vilified Nigerian President of Ijaw extraction,” he said, while accusing the federal government’s anti-corruption war of being a “President Buhari personal struggle.”

In his reaction on Monday, Mr. Shehu said the Buhari administration would neither succumb to media attacks nor would it be deterred by false accusations.

“The war against corruption is here to stay. As long as President Buhari is in power, Nigerians can rest assured of that.

The spokesperson said President Buhari’s administration is quite familiar with the barrage of verbal attacks that have accompanied the administration’s determined war against corruption.

“A number of Nigeria’s elite, uncomfortable with the disruption of business as usual, have fought viciously, usually via the media.

“However, this comment, coming from Umar, is highly disappointing. Because he is not in a position to label accusations. He should, instead, allow others to do this.

“Curiously, despite the various accusations and media attacks, no one has so far come forth with any evidence of President Buhari’s selectiveness in the war against corruption,’’ he said.

Mr. Shehu challenged anyone or organisation with any evidence of bias or partiality in the fight against corruption to make it public

He stated that all the agencies involved in the war against corruption were allowed freedom to carry out their responsibilities, without any interference whatsoever from the Presidency.

He said, “If Umar or anyone else feels that they have any evidence to the contrary, they are encouraged to make this public.

“Ultimately, the final frontier of the war against corruption is the judiciary.

“After the anti-graft agencies have gathered proof of corruption and made arrests, they present the accused before competent courts of the land, who have the final say on who is guilty of corruption and who is not.’’

Mr. Shehu maintained that President Buhari had never interfered with the judicial process, despite publicly expressing his frustration with how slowly corruption cases were handled.

“Again, anyone with a shred of evidence to the contrary is encouraged to go public with it.”

“A number of Nigerian elites have over the years benefitted from various forms of corruption, including monthly payouts from the office of previous National Security Advisers.

“Let me clarify that this is not in reference to Colonel Umar in particular.

“The Buhari administration has offended so many of our greedy elite by putting a stop to this, plugging many of the holes through which our country’s resources, belonging to each and every one of us, were looted by a few.

“Naturally, these elites are frustrated. But we shall not allow them to frustrate the war against corruption,” he said.