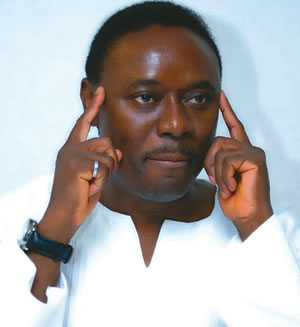 Chris Okotie is the first cerebral pastor in Nigeria to make an apostolic incursion into Nigeria’s dirty presidential politics. In 2003 he contested under Justice Party, placing 8th out of 29 candidates with 119,547 votes. Okotie formed FRESH Democratic Party and used the FRESH platform to vie for the presidency of Nigeria in 2007 , netting in 74049 votes, coming 8th among 20 candidates.

Security report and some independent electoral observers believed that the actual figures of the elections shows that Okotie actually got up to a million votes in each occasion but the trio of Olusegun Obasanjo ( former president), Tony Anenih( political henchman) and Maurice Iwu ( electoral umpire) and their agents of votes manipulations were magnanimous enough to allow a percentage of his votes to count , in the infamous electoral system where votes are written in the houses of party chieftains while hapless voters optimistically embark on electoral merry go round in the polling stations. When Okotie failed to win the do or die electoral fraud, a lot of Pentecostal pastors derided him and asked him where his God was.
Chris Okotie is a man of many firsts, both good and not so good. He was the first cerebral personality to embrace Christ in the early eighties. His first album ‘I Need Someone’ released in 1980 made him the most celebrated Nigerian pop musician. Himself and Jide Obi’s album ‘’Kill Me With Love’’ released in 1981 made the duo the most popular young musicians of the eighties. Therefore when news went round that the two law students of University of Nigeria, Enugu Campus are now preaching the Bible, it caused a stir and groups gathered to discuss the evil that had descended on the music industry while the church people rejoiced that Jesus had captured a hell bound soul. At that time parents would prefer a drunkard in the family than a born again, bible believing and bible preaching embarrassment.His popularity then could be likened to that enjoyed by Tu-Face Idibia, P-Square and D-Banj in contemporary Nigerian music. While Churches and groups like Scripture Union, Assemblies of God Church, and Grace of God Mission etc rejoiced at the capture of a hell bent sinner, disco, rock and party lovers cursed the gods that snatched him out of their hands. I could recall vividly how patrons of Palm Beach Hotel and Enugu Guest House night clubs at Uwani area of Enugu were thrown into mourning because’ the church rats’ have snatches off a music star. Okotie barely finished his law degree programme in University of Nigeria, Enugu Campus and jetted to the US for theological education.
Okotie was the first celebrity in Nigeria to become a pastor. He started Household of God Church in 1987 after attending Bible School in the United States and was the first to introduce ‘Americana’ into Nigeria’s Pentecostal fold. Praise and Worship were rendered in high tempo American style with a lot of jumping, shouting and excitements. His tempo made Archbishop Idahosa’s own seems like a child’s play –though Idahosa struck a balance between western and native worship system. Okotie’s sobriquet ‘’uh..uh uh..uh’’ whatever it means, is yet be imitated by anybody.

Okotie also introduced Jerry Curl hairstyle into the Pastoral Ministry. While some pastors who visited his church then, came back and headed straight to the hair stylist to make some hairdo adjustments, others changed their phonetics, dressings and imported elements of ‘Yuppies’ and exuberance into the system. Today some Nigerian pastors like Chris Oyakhilome , TB Joshua among others adorn stylish hairdo and phonetics.

In 2002, he told a stunned nation that he will be the president of Nigeria. Though he has failed twice, he reiterated the views in December 2010 saying” what I’m saying, that my time will come. I already quoted Abraham Lincoln in the sense that I am so sure that it is a divine mandate. All I have to do is wait for the right time and not compromise my philosophy or compromise my faith and join a conglomerate of men and women who call themselves political parties, whereas they are just a conscription of men and women of anti-theatrical philosophies who have no ideological connectivity and their only common denominator is their desire to annex wealth. Because I believe in a Nigeria where truth reigns; a fresh Nigeria which our party symbolises in F-Faith, R-Responsibility, E-Equality, S-Security and H-Hope. This is the philosophy upon which I have erected the citadel of my confidence because I believe only a fresh Nigerian can salvage this nation. All this cosmetic and superficial activity that are going on by the ruling party is a journey in futility. This will also drift us back to square one”.

It is prophetically discernible that Okotie was sent on apostolic mission to break the barriers creating apathy from among the believers and the clergy towards involvement in politics .When good Christians keep away from politics, the evil ones will mess up the destiny of the nation and bring calamities on everyone. I believe that Okotie misinterpreted his mission and such is not uncommon with people whose prophetic insight is not sharp. He must not become the president of Nigeria before the agenda is fulfilled. An apostle is a person divinely sent to a particular place or people to start a peculiar move of God. Some Apostolic Ministries are territory based while others are activity based and still some are both territorial and activity based. Hence we hear people call someone Apostle to the Gentiles, Apostle of Faith etc. Okotie’s own is activity based with limits of changing the mindset of believers towards politics and ensuring active participation of the clergy and laity in such matters so that sons of God can exhibit the light of God in public spheres and save Nigeria all the constant injustice, corruption, mediocrity and poverty ravaging the land.

Okotie’s apostolic ministry was first exhibited when he broke the barrier of spiritual indifference, skepticism and suspicion which the Pentecostal fold views politics, activism and secularism. In an apostolic move, he introduced an award, known as the Karis Award which seeks to reward Nigerians who have distinguished themselves in acts of patriotism and national service irrespective of religious affiliations. Recipients of the N1million naira award included both Christians and Muslims among who are the late Gani Fawehinmi, Pa Michael Imoudu, Gen Murtala Muhammed, Mallam Aminu Kano, Mrs Magraret Ekpo among others and thus started a process whereby the church moves from being a disinterested party to being an active observer of the polity. When a church rewards both Christians and Muslims using merit as criteria, it means that the barriers of religion hoisted on the nation through colonial manipulations is gradually being broken and dislodged and with more efforts, would be totally dismantled.

Chris Okotie was the first known Pentecostal pastor to venture into the murky waters of Nigerian politics in the order of late Rev Martin Luther King and Rev Jesse Jackson whose foray into U.S politics was instrumental to the eventual liberation of Black Americans of which Barrack Obama was a beneficiary. Okotie’s entrance into the stormy waters of Nigerian politics was an apostolic move meant to breaking the jinx which made the Pentecostals to say ‘’ take your politics and leave my Jesus for me’’ mantra.  PFN, CAN , GAAICOM and other Christian pressure groups in Nigeria have been encouraging their members of recent, to participate in politics.

God told Abraham that he will possess the land of Canaan and the patriarch of Faith, in robust prophetic left Mesopotamia for Shechem in Canaan, lived there temporarily and when famine visited Canaan, he left for Egypt. Abraham, by that encompassing, has spiritually secured Canaan for generations of Israeli till today. This was the kind of assignment Okotie was sent to do in Nigeria’s political sphere but dwarf prophets who see prophesy as only when they call the bank details and village names of their congregation, always makes mockery of prophetic and apostolic moves they fail to understand.

I stated in the older version of this piece, published in 2012, that though Okotie failed to win the election, he won the fight at the spiritual gates whereby sons of God are barred from participating in the current affairs of their nation.Therefore,the fire stocked by him in 2003, 2007 and 2011 is catching like wildfire- therefore, whosoever says that his entrance into politics is not divinely instructed, is displaying prophetic and apostolic ignorance.

Following the footsteps of Chris Okotie,fiery Nigerian prophet, Tunde Bakare, in 2011, was running mate to a popular Muslim candidate, Muhammadu Buhari, and both were able to secure 12 million votes for their opposition party in an election that has elements of manipulations. In 2015, another Pentecostal pastor by name Yemi Osibanjo, a professor of Law, also became the Vice Presidential Candidate to the same Buhari. This time around, the duo won that election, defeating an incumbent President. Therefore, Chris Okotie’s Apostolic Moves have yielded fruit, and heavens will reward him at the appropriate time.

Chris Okotie‘s insightful expose on the book of Revelations was an effort to dissect the signs of the times. His then popular TV programme, The Apocalypsus was interesting and revealing, even though the quality of grammar exhibited during the series disenfranchised some not so literate viewers. Keeping a dictionary handy during such expositions was helpful for some persons.

Chris Okotie has been visited with a lot of temptations of life meant to pull down his Christian faith. His marriage to first wife Tina broke after fourteen years and another marriage of four years to Stephanie Henshaw, crashed recently and he has signaled intention to pick a third wife. Stories of disturbing sexual scandals are not new in that church. It seems those beautiful girls and celebrities who dot his church are more interested in Rev Chris Okotie than his message, and as such have constituted themselves into a group of lustful pretenders waiting for opportunity to tear the pastor to pieces. Rev Okotie has to deal decisively with these recurring cases of tolerating lustful female seductionists occupying church seats, in order not to tarnish a testimony of unusual, bold apostolic moves.

Temptations and trials come to every child of God and how one reacts to it is a different ballgame. It is only God that can explain why He allows some afflictions to visit some people but we are enjoined that all things works together for them which are in Christ Jesus and above all the ultimate goal is to be in heaven with other saved ones. When such adversities engulf a person, there is every tendency to miss focus. Therefore, those who have labored for God in the past need extra carefulness so that the devil does not rubbish their past testimonies and Okotie is one of those.

Chris Okotie as God’s servant defied odds in the past to always chart a new strange course for the body of Christ and the nation. His Apostolic moves have woken a slumbering and indifferent Christian community to the realities of not allowing the corrupt minded to rule over them.

Despite associated shortcoming in his personal lives, Okotie’s Apostolic incursion into Nigerian politics have charted a way in the wilderness for wandering Christian politicians.