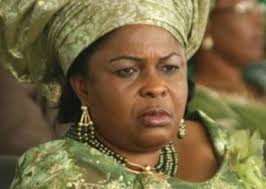 Widows in Anambra State have accused the First Lady, Dame Patience Jonathan of deceiving them with an empowerment programme she organised last weekend at the Alex Ekwueme Square in Awka.

In a report made available in The Nation newspaper, Mrs Jonathan promised to distribute some items to the widows but at the end of the rally, the widows said the First Lady did not fulfil her promise.

Mrs. Jonathan and the organiser, Prince Arthur Eze were said to have assembled various items to distribute to the widows which include grinding machines, garri processing machines, soap, sewing machines, hair driers, bags of rice and beans, to garner support for President Jonathan’s re-election.

However, the widows accused the First Lady of playing politics with the programme. They mentioned that the items were meant for politician’s wives and not widows.

Leader of the concerned widows, Mrs Hope Nwandu, who spoke with reporters in Awka, the state capital, said none of the widows got their item and many left their homes as early as 7am and remained at the Square till 10pm.

“Why should they use widows to play politics when they knew it was not real? Those fronted as widows are politicians. Anybody who ridicules widows is bound to have problems. It is even in the Holy Bible. You should not use widows for political propaganda because when widows cry out to God, the wrath of God will descend on those involved,” Mrs Nwandu said.

Another widow, Mrs Nkechi Oguelina, who spoke with reporters, said that those assigned to share the items were to blame.

Information gathered also revealed that the First Lady of Anambra State, Mrs Ebelechukwu Obiano, ordered that the items should be taken to the Governor’s Lodge at Amawbia. The directive angered the widows and protested against the move. The coordinators of the programme were also alleged to have shared items meant for the widows among themselves.

Another widow, Mrs Florence Obiefuna, who picked holes in the programme said they hired two buses to Awka because they were invited.

Her words: “All the widows paid for their fare and some of them are on my neck to refund their money. Where will I get the money to pay them when it is difficult for me to feed my family?

“Imagine we were at Alex Ekwueme Square from 6.30am to 10.30pm without anything given to us. Even the gifts items promised us have not been delivered. They told us they would be shared on the basis of the local governments. But those asked to coordinate the programme are sharing the items among themselves, especially the politicians, who took up three different items,” Mrs Obiefuna said.