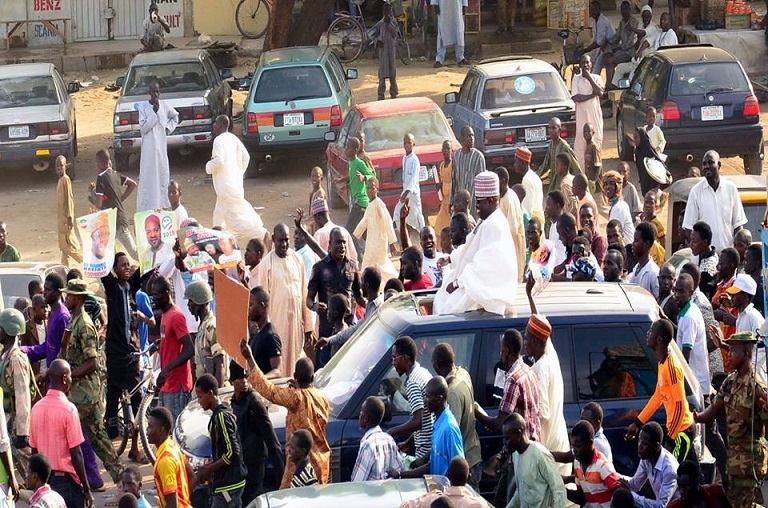 A video depicting the Katsina Governor, Ibrahim Shema, prodding his party members to physically assault and possibly “kill” opposition politicians in the state, has gone viral on the internet.

The amateur video was first posted on the internet on November 12.

It shows the governor, dressed in white agbada and brown sandals, standing on a red carpet, and addressing a crowd in what seemed like a political rally. He spoke in Hausa.

Mr. Shema likened opposition politicians to “cockroaches” before asking the crowd what to do if they found the nocturnal insect in their apartments.

The crowd chorused “Kill them!”

“Crush them!” the governor responded, agreeing with the crowd.

Similar calls have triggered violence in other countries including the East African country, Rwanda, where the majority Hutus’ description of the minority Tutsis as “cockroaches”, helped fired a 100-day murderous campaign that saw over 800,000 Tutsis killed.

Mr. Shema is a second term governor and a member of the ruling Peoples Democratic Party, PDP.

In 2011, he fought hard to secure a second term after the state’s main opposition then, the defunct Congress for Political Change, CPC, expanded rapidly and gained influence in the northwest state. CPC is now part of the opposition All Progressives Congress, APC.

Katsina State is also the home state of Muhammadu Buhari, a leader of the opposition APC and a contender for the APC Apresidential ticket for the 2015 election.

Katsina has a relatively minimal history of violence, although the state has been noted by election observers for a significant incidence of underage voting in previous elections.

The video which has drawn stringent backlash online ended with the governor emphatically asking his fans to reprise any attack from the opposition.

“Before now people from the opposition will humiliate us in the PDP and we will say don’t do anything about it. But now I am telling you to fight back and ‘quote me’,” the governor emphasized.

Mr. Shema could not be reached for comments on the story. His aide, Sani Malumfashi, a Special Adviser on media, said he was away and is only expected back on ‎Saturday.

A transcript of the video is posted below.

“PDP has touched the lives of every citizen of Katsina state, either as an individual or your family in general.

“If your child is sick you must take him to the hospital to receive treatment for free.

“You must use the well-built road that PDP constructed to go to your house.

“Your children have never paid a single dime for his education in this state since I became the governor in 2007 and that includes WAEC and NECO.

“We should thank Allah for this.

“If you look around, some states that I will not mention here, they keep making the headlines that PDP could not do this or that, but they should know Katsina state is PDP and we have done it.

“You should not be bothered with ‘cockroaches of politics.’

“Cockroaches are only found in the toilet even at homes.

“If you see a cockroach in your house what do you do?

Crowd responds: “You kill it!”

“Anyone who does anything against you we’ll retaliate, am telling you now.

“Before now people from the opposition will humiliate us in the PDP and we will say don’t do anything about it but now I am telling you to fight back and ‘quote me’”.