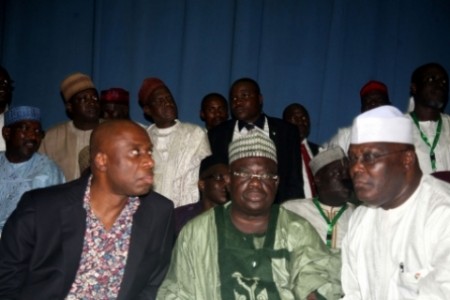 The party accused the federal government of corruption and incompetence.

The crisis in Nigeria’s ruling Peoples Democratic Party, PDP, worsened to what appears a point of no return on Thursday when a faction of the party accused the Jonathan administration of running Nigeria’s economy “aground.”
The Baraje-led faction of the Peoples Democratic Party, PDP, condemned the rape of the country’s economy by the Goodluck Jonathan administration.

The faction is backed by seven serving governors (Sokoto, Kano, Niger, Kwara, Rivers, Adamawa, and Jigawa), former Vice President Atiku Abubakar and some other leaders of the party. The Speaker of the House of Representatives, Aminu Tambuwal, is also believed to be a closet member of the faction.

The spokesperson of the Baraje-led PDP, Chukwuekeka Eze, in a statement on Thursday in Abuja quoted Abubakar Baraje, the chairman of the faction, as saying that despite claims to the contrary by the Administration in a futile bid to deceive Nigerians, the overwhelming evidence was that the Nigerian economy had been run aground by the present administration and was now comatose.

He said with the massive scale of officially-induced oil theft, the dwindling returns from oil and massive looting going on at the federal level, Nigeria was surely on the brink of economic collapse.

One manifestation of this, he added, was the Federal Government’s inability to pay states their share of federal revenues since July.

“The last time that states were paid was for part of July. The arrears continue to mount by the day. As at today, the states are being owed N336 billion, with the N75 billion being the balance of the July 2013 arrears, N121 billion from June augmentation and over N90 billion as July augmentation,” he said.

According to Mr. Baraje, the implication of this unfortunate development is that the 36 states have become impoverished and unable to meet up with basic obligations, including the payment of workers’ monthly salaries, which many of the states have been unable to do due to lack of funds.

Most states have also as a result been unable to meet their obligation to contractors. This dangerous scenario is complemented by the growing rate of unemployment, which presently hovers around 80 per cent, the politician said.

He also said all these portended very grave danger for the country as youth and labour restiveness appeared imminent.

“Nigerians should expect further worsening of the unemployment situation and the loss of jobs, which is inevitable should the Federal Government continue with the present shoddy management of the economy which leaves much room for abuse.

“Ironically, while the masses suffer, Government officials continue to feed fat, using various guises to fritter away our common patrimony. They continue to enjoy a life of opulence, which has blinded them to the realities of the monumental suffering to which the masses are being subjected on a daily basis,” Mr. Baraje said.

Where has all the money gone?

Mr. Baraje also accused the government of being a spendthrift, querying the whereabouts of billions of Naira earned by the administration. He said the Central Bank of Nigeria, CBN, had revealed that the country earned a total of N1.05 trillion in July, and questioned why the finance ministry could not pay states their due statutory allocations.

He said Nigerians could no longer be deceived.

“The truth is that Nigeria is broke and it shows that worse days are ahead under this inept administration,” he said.

The Baraje-led PDP also said it was unacceptable for Nigerians to be subjected to high level of suffering when their country is one of the world’s leading oil producers.

He said the Nigeria Governors’ Forum, NGF under the leadership of Governor Rotimi Amaechi that “includes the progressive G7 Governors of the authentic PDP” recently raised the alarm, calling on the finance minister to resign in view of her shoddy running of the economy.

The finance minister, Ngozi Okonjo-Iweala, who is also the Coordinating Minister for the Economy, has said there was no cause for worry about the economy; a claim the factional PDP disputed.

“Since nobody has a monopoly of wisdom, we wish to advise President Jonathan to humbly consider the NGF Report on the nation’s economy and see what he can borrow from it to take the country’s economy out of the woods,” the factional chairman said.

Mr. Baraje called on Mr. Jonathan to act fast to rescue the country as there was a limit to which Nigerians could be pushed.

“Anything short of this is an invitation to anarchy. A word is enough for the wise,” he said.

Thursday’s statement by the Baraje-led PDP appears an indication that the crisis in the party would not be resolved.

Several meetings by leaders of the two factions of the party, as well as interventions by elders of the party, have yielded no result. This new attack on the Jonathan-led PDP administration may also confirm the believe of some Nigerians that the Baraje-led PDP was set to leave the party for an existing political platform or form its own.