NewsRescue– Yet to be confirmed reports have it that the early release of Nigerian militant terrorist, Dokubo Asari, from Benin, was facilitated by top level intercession from the Jonathan administration. Due to what they consider as foreign interference with due process and pursuance of justice, our information has it that the Beninoise gendarmes have warned that with the blockage of full investigations and the natural course of law, Mujahid Asari Dokubo will be declared a Persona non grata, banned from the republic which he calls his second home. In such cases, upon entry he will be immediately locked up.

NewsRescue is yet to confirm the accuracy of these reports in whole, but we have confirmed that Nigerian diplomacy was engaged in securing his release. Related: Nigeria: Dokubo’s MEND Terrorists Threaten Neighboring Benin Republic Over Arrest

MEND terrorists of Dokubo’s camp had gone as far as issuing direct threats of violence against Benin republic, as we published yesterday. The impact of this entire incident on relationships between Nigeria and its neighbor is yet to be determined.

It has been reported that Nigeria’s Presidential jet was used to fly terrorist leader, Dokubo Asari to Abuja. This accounts to a violation of Nigeria’s safety, security and status. Asari Dokubo did not sign the amnesty granted by the Federal government, which makes him officially a terrorist engaged against the nation.

It can be recalled that in November last year, a Nigerian presidential jet was impounded in France while a certain person, Jide Omokore, a front-man for Nigeria’s presidency, investigated in national financial misappropriations to the tune of trillions, was using the jet for his personal runs. Such reckless misuse of public property is a fragrant violation of Nigeria’s national and international security interests. Related: NewsRescue–How Diezani Gave N60tr, Nigeria’s Income For 4 Years To Jide Omokore In 4 Oil Blocs

More recently, presidential jets have been used for political campaigns, flying Al Mustapha, known as late dictator Abacha’s hit-man, who was released from jail after being convicted in the murder of Kudirat Abiola. 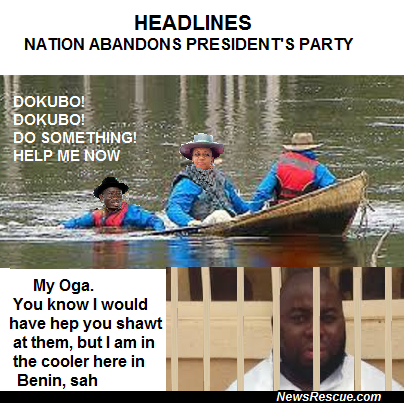