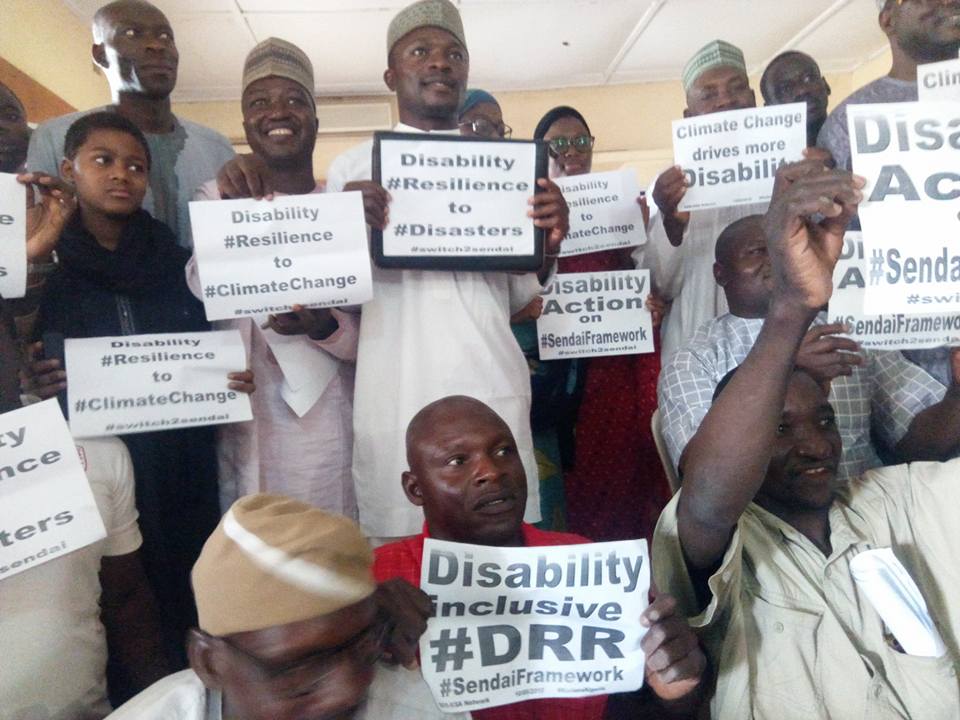 In a sensitization workshop  organize by The National president “ Beyond  The  Boarder of Disability Initiative Nigeria”  Comrade Rilwanu Abdullahi says ,disabled persons in Nigeria are the worse hit by Climate change due to No one clear about the  daily challenges  they  faces in the communities in terms  of adapting to critical weather condition in the country.

Rilwanu says the sensitization  is the first of its kind in the history of Nigeria as a whole ,this is simply because  there is no any association ,group or organization that is championing the causes of disabilities which  has ever made an attempt to sensitize the disabilities community on this Global aspect of climate that is affecting all sectors of humanity.

He says majority of Nigerian handicaps  were blind, some of them were deaf, leprosies ,indeed   some use wheelchairs, canes, crutches,also some use wheel barrow as a mean of transport ,in other  to move from one place to another in a critical condition, stressing that only the rich once among them make use of Tri-cycle machine to ease their movement.

According to him, the devastated nature of the environment, and other climatic factors always force us to enter into trouble when its rain, also  during Harmattan ,and bad weather with natural disaster

He says, “No body cares to know how we move into  our local communities as a result of bad road when there is flood, natural disaster with our roller skate, and as for the blind they uses their local sticks to locate their road and go back home.”

“Nigeria has the population of over 15 million of person with disabilities, and the number keep on increasing as a result of  daily accident, ethno-religious crisis, Farmers and herdsmen clashes, and the continuous  attack on communities by Gun-men which is forcing large number of people into migration”

“Extreme bouts of heat, rising sea levels and an increase in natural disasters are just some of the challenges we will face in Nigeria ,and there is no any organization that duly volunteer to be sensitizing us on ways to adapt to the Critical situation we found our serves as a result of human factors that create  the problems for us”

Rilwanu further says , it may interest you to know why his team decided to engaged his people on this issues of climate change ,its simply because  it affect us all in the area of movement and health wise  just as it affects any other individuals world-wide

The theme of the event; The role of persons with disabilities in the daily fight against climate change in Nigeria

According to Rilwanu The attitudes of human being Human in dumping waste to the gutter is causing so many disaster to us,as many cannot be able to move from one place to another

“To be frank,we are the most affected  to  all the artificial and natural disaster caused by human being,and as you can see we are people that cannot move like the rest of human being

Rilwanu further mension that,most of the Nigerian road are not friendly to persons with disability hence the need for Government to find means of help the handicap ,in other to over come the challenges they are going through

Alhaji Ibrahim mohammed Gashsh is the national president,National tranquity movement of Nigeria that pointed out how climate change is becoming to be  a big threat to the life of person with disabilities in developing country Like Nigeria

He says , Due to existing inequities and disparities, people with disabilities will face a disproportionate impact due to climate change.

Adding that People with disabilities and their families need adaptation and coping strategies and robust systems and mechanisms that can mitigate and minimize the harmful effects of climate change, and promote sustainable access to basic necessities, secure livelihoods, health care, and social and civic participation.

In his own remark Dr Tabi joda is the representative of  Green Aid Africa,and he suggest some ways in which the physically challenged person can help them serves in the fight against climate changes in the assorted communities’

1-there is need for advocacy to elected leaders ,so as to informed them about their issues

Also in his own contribution at gathering,Pastor yohanna buru,the general over seer of Christ evangelical and life intervension ministry sabon tasha kaduna south,he presented a paper with the titled; Christian perspective view on Climate change”
Buru said, Climate change is a well known issue in the Holy Bible that every student of Bible is familiar with. The foundation on climate starts with the beginning of creation, where God created the climate. In the beginning God created the planets like the Moon, Sun, Earth and other planets whether mentioned or unmentioned. He created the waters, the skies, seas, seasons and times like the Spring, Summer, Autumn and Winter ( Genesis 1).
He said ,God set them on cause, to work according to His plans, purpose and design. The seasons produces the climatic environment or hosts the climate. And in regards to the issue of climate change, the Holy Bible didn’t so much talk directly on the issue like climatologists or geologists or ecologists are talking or approaching it.

Adding that ,almost everything about climate change is understood more from the fall of man or sin of man and the eschatological perspective as a sign of end of times.
The details on this can be seen in the book of Revelation, where Apostle John the Revelator gave a graphic picture of the sign of end of times. That there will be a drastic change from the climatic perspective, and that will affect every aspect of human life.

In fact, that will cause famine, pestilences, excessive heat, plants, livestock, living things will be affected as they dry up or died. Because of this disaster that will befall the earth as a result of climate change, there will be earthquakes in diverse places, raging of seas or storms and other climatic problems from the climatic, geological, ecological and other environmental problems etc. (Matthew 24; Revelation 6-18etc).

In his own closing remark, Mallam Nurudden Belle, director of school of health science Kaduna,appealed to Nigerian to immensely embark of trees planting to save the northern region from turning into desert area,

Meanwhile the representative of African Climate reporters that attended the conference also appealed to Nigerians , to stop throwing Trash into the Gutter, so also emphasized on the danger of Climate change how it affect  the life of person with Albinism in Africa.