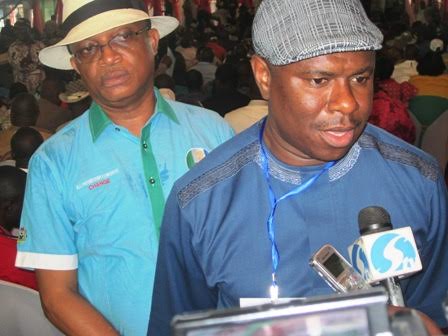 The appointment of Dr. Dakuku Peterside the Rivers APC Flag-Bearer in the 2015 general elections as the new Director General of the Nigerian Maritime and Safety Agency (NIMASA) has been hailed by the Rivers State Chapter of the All Progressives Congress (APC), which described it as well deserved. “Based on what we know about Dr. Peterside, we make bold to say that his appointment, on Thursday, as the new NIMASA DG is a case of putting a square peg in a square hole,” the party said in a statement issued Friday in Port Harcourt by the State Chairman, Dr. Davies Ibiamu Ikanya.

It described Dr. Peterside as a tested and trusted reformist-minded Administrator who has all it takes to reform and transform NIMASA into the pride of Nigeria and Africa.

“Dr. Peterside comes well prepared for the task of breathing a new life into NIMASA. Apart from boasting a sound academic background that includes a degree in Business Administration (Management) and certificates in Leadership and Project Management, he holds a Doctorate degree in Organizational Management with research interest in Corporate Political Strategy.

Dr. Peterside is reputed as an authority in corporate strategy and business-government relations. He acquitted himself creditably in all his previous assignments, including as Commissioner for Works in Rivers State and a distinguished member of the Federal House of Representatives and Chairman, House Committee on Petroleum Resources (Downstream) during the Seventh Assembly.

He is a well-known champion of reform and strengthening of institutions as key to unlocking development potentials. Dr. Dakuku Peterside, a Legislator par excellence  has served at all levels of Government in Nigeria; Local, State and National and is fast establishing himself as a National reference speaker on oil and gas policy and legislation matters.

Dr. Peterside has been a most sought after resource person in international conference; he was a major speaker at the 2013 Middle East Downstream Week held in Abu Dhabi in May, 2013 and the 2013 World Refining and Petrochemical Technology Summit in Doha, Qatar, amongst many other speaking engagements around the globe. We have no doubt in our mind that he will excel on his new assignment as the NIMASA Director General,” Rivers APC said.

The party congratulated Dr. Peterside and assured him of its prayers for his success in his new duty post. It commended President Muhammadu Buhari and the Minister for Transportation, Rt. Hon. Chibuike Rotimi Amaechi, for the confidence reposed in Dr. Peterside as evidenced in his appointment as the helmsman of a strategic parastatal like NIMASA