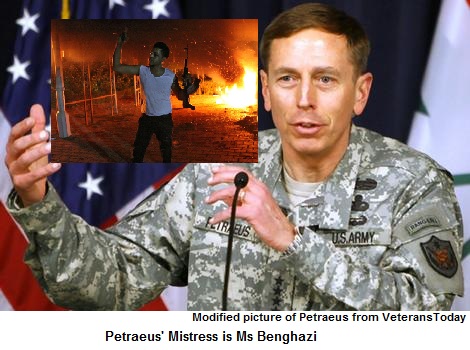 By now, unless your TV, radio or computer is on the fritz, you heard that CIA Director David Petraeus resigned for diddling his biographer, Paula Broadwell. Her ironically titled book, “ALL IN,” probably should have been renamed, “ALL THE WAY IN.” But this is a sideshow.

The story is confusing and conflicting. First, we are informed that the FBI was investigating Broadwell for illegally accessing the CIA Director’s email accounts. Since she was the authorized biographer, that seems a bit strange. And how did the FBI learn that she was “illegally accessing” Petraeus’ email? That is very curious.

Second, we are told that the FBI was investigating Petraeus? For what? Leaking intel to David Ignatius? Seems very odd.

The story is circulating that the White House had this dirt on Petraeus and tried to use it to pressure him to keep mum on the Benghazi failure or take the blame. Petraeus, not willing surrender to this threat, reportedly took the pre-emptive step of outing himself and resigning.

What is the Benghazi secret the White House is trying to hide? Read more…