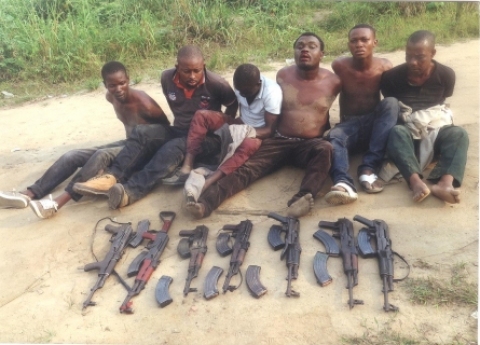 Among them was Daniel Ibito-Anga, who parades himself and is known in Ogu Bolo as Security Adviser/PA to Senator George Sekibo (Rivers East Senatorial zone) and Evans Bipi, the Rivers State Assemblyman who was recently stopped by a court from parading himself as the Speaker of the Assembly.

In addition to the rifles, the men had 146 rounds of 7.62mm Special life ammunition and 10 life magazines among others.

They were stopped on the basis of their suspicious movement as they headed for Ogu Bolo Local Government Area in an off white Land Rover jeep with registration number JJ441BZ.

Both Senator Sekibo and Evans Bibi are from Ogu and have publicly confessed to being extremely close associates of Nigerian First Lady Patience Jonathan, who hails from nearby Okrika, and they all speak the same Okrika dialect.

The weapons displayed in the photos were recovered from the men arrested yesterday.