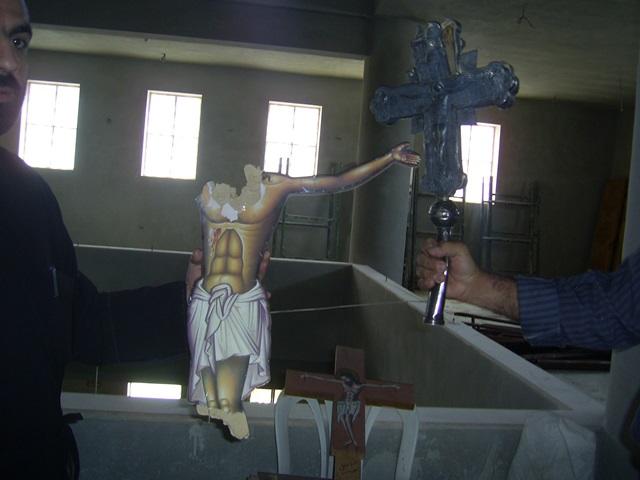 Images obtained exclusively by Infowars show the aftermath of an alleged massacre of a Christian village in Syria during which men, women and children were slaughtered and churches desecrated by Obama-backed FSA rebels.

The photos, which were provided by a source inside the village of al-Duvair in Syria’s Western province of Homs, show ruined homes, ransacked churches as well as the burned remains of what looks like an infant.

According to the Assyrian International News Agency (AINA) on May 29, “The armed rebels affiliated to the Free Syrian Army (FSA) raided the Christian-populated al-Duvair village in Reef (outskirts of) Homs near the border with Lebanon….and massacred all its civilian residents, including women and children.”

However, our source tells us that the Syrian Army were able to intervene before the rebels were able to slaughter the entire village.

These are some of the very same rebels that the Obama administration is set to arm following the House and Senate Intelligence Committee’s green light for the White House to send heavy weaponry.

The decision to send arms was made despite a plethora of evidence confirming that FSA rebels have joined forces with Al-Qaeda terrorists and are committing atrocities on a routine basis. Some fighters have even threatened to commit more war crimes if heavy weaponry is not immediately sent by western powers, while others have vowed to attack the US and Europe once they are finished in Syria.

It is important to stress that it was the Syrian Army, which is predominantly Sunni Muslim, that stepped in to help the Christians who were under siege from radical jihadist militants that now form the front line fighting force of the FSA.

This is by no means the first time that western-backed rebels have attacked Christian churches in Syria. As we reported in June last year, images sent to us by a woman in Homs depicted a desecrated Catholic church as well as a member of the FSA posing for a photograph wearing a looted priest’s robe.

View the images below, some of which are disturbing.