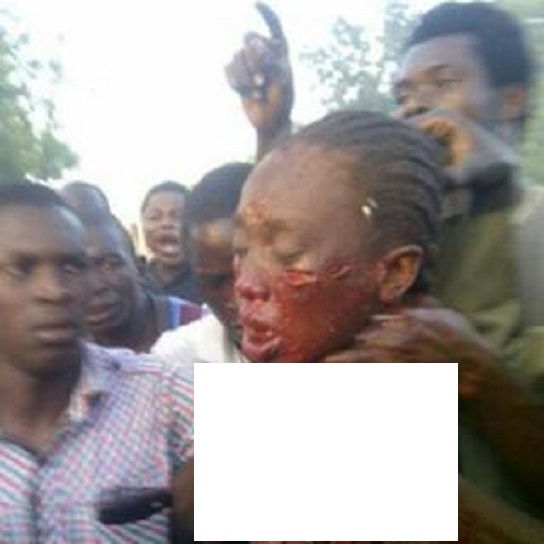 The picture obtained of the suspected female suicide bomber apprehended after a market attack at a mobile phone market in Azare, Bauchi State at abot 6pm today, has surfaced.

Over a dozen were reported killed with dozens injured.

The torn up lady was caught alive with other suspects by mobs. The mobs killed one and apprehended another man who allegedly accompanied the bomber.

We are unable to confirm this image.

People are asking whether she is one of the abducted Chibok girls. In addition to 234 girls abducted from Chibok on April 14th this year, thousands of men, women and children within Boko Haram annexed territory of Nigeria are being forcibly recruited as soldiers and potential suicide bombers at the service of the terrorists.

The Jonathan government is currently fighting against the successful efforts of the Ibn Fadlallah patriotic civilians vigilante army that has been sacking Boko Haram and recovering Nigeria’s territories.

The latest update on the war is the summoning of all vigilantes who freed Mubi and Mahia and the arrest by the State security department under Goodluck Jonathan of Sarkin Baka Adamawa, the head hunter who led the vigilantes to defeat Boko Haram.