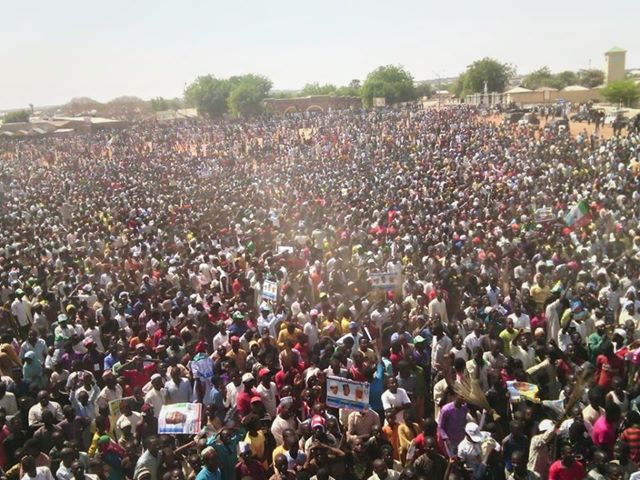 Contrast to images of a half empty stadium the PDP experienced , Gombe was paralyzed for the Buhari rally. 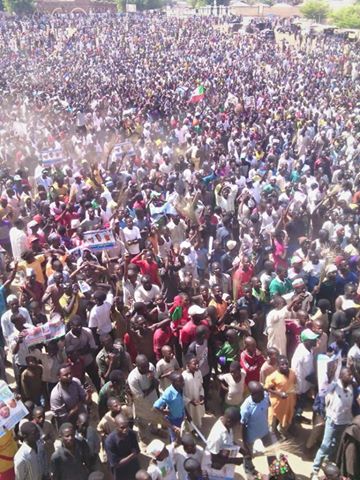 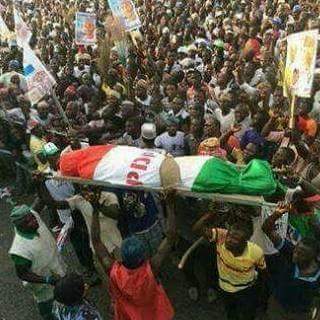 SPEECH DELIVERED BY THE APC PRESIDENTIAL CANDIDATE, GENERAL MUHAMMADU BUHARI AT A MEETING WITH THE ORGANISED PRIVATE SECTOR HOSTED BY GOV. FASHOLA, SAN

Good morning ladies and gentlemen. Thank you for responding to my invitation.

In the course of asking Governor Fashola to set up this meeting, two things occurred to me.

The first is that I told him that I meant business by getting Nigeria’s economy back on its feet.

This is why the caption of this meeting is: “GMB Means Business.”

Number two, he told me that he meets with you every six months to listen to your problems and provide solutions within the following six months.

This is a wonderful idea because Government can not know in detail business developments as they occur because it is too immersed in various other aspects of Government.

A periodic and regular series of meetings is something I will encourage if you elect me as your next President so that our Government can hear from you at firsthand what we should or should not do to advance business interests.

This will be our approach to growing the economy, creating jobs and restoring the dignity of labour among Nigerians.

I will however start by sharing with you, a summary of the economic plans highlighted in our manifesto.

As practical as it is possible to do so, our policies for implementing our commitments will be governed by the highest consideration of how they create jobs.

Equipping and resourcing our security personnel, for example, will not be limited to provision of arms alone, but uniforms, boots and accoutrements, are enormous opportunities for textile production, garment making and shoemaking.

Power supply is the minimum that we can seriously commit to in order to quickly galvanise the economy back to productivity.

We agree with the privatization of the power utilities but we believe it must go further to transmission.

After the signing and handing-over ceremonies of the power assets the real work of producing, transmitting and distributing power is really just beginning.

The reason why the success seems elusive is that apart from the signing ceremony and handing over of the power assets, the hard work to connect the various parts of the power chain, supply gas, install transformers, complete substations has not been done.

Our studies show that we will require no less than 200,000 trained personnel to support the initiative to provide power and light up Nigeria.

Apart from the inherent direct employment that this will give, the reduction in cost of production, the savings from self-generation by Nigerians, who currently spend a lot of their income on purchase of diesel and petrol to generate their own electricity, will reduce the burden on their disposable income.

These savings to Nigerians from reliable electricity will help the average Nigerian spend their money on other basic necessities of life and reduce poverty.

There is already an initiative to build a refinery in Lagos. Our Government will fully support this initiative because a local refinery means many things such as:-

a. Jobs locally at a Nigerian refinery instead of refineries abroad;

c. Reduced importation, less demand for foreign exchange and strengthening of the Naira

Other areas of infrastructure investment is roads and highway construction from one end of Nigeria to the other.

We will concentrate on the roads and highways that link up Nigerian states, while state Governments will be expected to connect their states to these highways by building the last mile connections.

Road construction alone will unlock a value chain of opportunities in the built industry for construction companies, builders, engineers, architects, quarry operators, cement and iron rod production and supply.
​
The successful opening up of Nigeria by the construction of new roads and highways will revive road transportation, truck manufacture, tyre manufacture, engine oil, brake pad production on one hand.

It will also create a demand for jobs for mechanics, drivers and those engaged in transport support business.

We expect a revival of all the inter-state economies that used to thrive across Nigeria, providing support to travellers by way of canteens, restaurants, farm produce, etc.

This is a summary of how we intend to revive the economy. But I know that there are views you have about what will help and what will not.
So, apart from sharing our plans with you, the other purpose of this meeting is to afford me the opportunity to listen to you. To hear your own side of the problems. We shall collate your views and proposals in policy formation.

I wish to invite you to sit with my economic team to look at our proposals and develop workable policies and implementation options. In particular we would like, in consultation with you to explore options of reducing taxes and customs duties without too much disruption to Government finances and private sector business plans.

Before I yield the floor to you, I wish to say a few more words about our manifesto and our campaign message.

The manifesto of the APC is the product of a survey that took over 6 months to develop. We spoke to over 20,000 Nigerians across the 36 states and the FCT.

The questionnaires we issued to them and the interviews we conducted showed overwhelmingly that; Insecurity, Corruption and the Economy were the biggest worries among the electorate.

This is why I have been talking about Insecurity and Corruption on the one hand; and Mining, Agriculture, Infrastructure and Jobs on the economic side.

Corruption affects our ability to secure ourselves, and it also undermines the performance of the economy.

Let me share some figures with you to demonstrate what I mean.

This current Government is being challenged to account for an estimated $20 Billion and the whole country is awaiting a report of a forensic audit.

If it is true that this sum cannot be accounted for, this is grossest form of corruption. Just think at N5 Million per vehicle, this money would have bought 840,000 patrol vehicles (This would have improved security in every town and village in the country).

At N13.5 Million for a high capacity bus this money would have bought 311,000 buses (This would have revolutionised the transport and production side of the economy).

From information at my disposal, Lekki Bridge in Lagos cost N29 Billion to construct. N4.2 Trillion would have built 145 Lekki bridges (This would have revolutionised Transport, Infrastructure, Construction, Employment in the economy).

If the average cost of generating 1 (ONE) Mega-Watt of power is about US $1.5 Million (excluding gas and distribution costs), $20 Billion would have bought us over 13,333 Mega-Watts of power. What a difference that would make up and down the country.

If you also factor the N2.2 Trillion spent on subsidising fuel import which became a huge scandal, you may then understand why our manifesto focuses on the issues of security, corruption and the economy.

Thank you for listening, I will now like to listen to the problems and your proposals, from your own experience as industrialists and business executives.