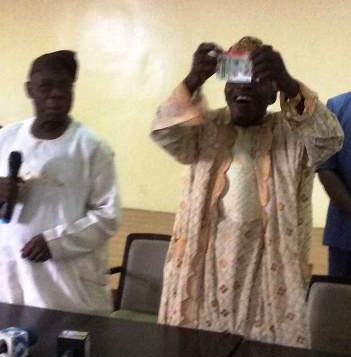 He handed over his PDP membership card to the Ward 11 leader in Abeokuta North local government, Alhaji Surajudeen Oladunjoye and instructed him to tear it.

Oladunjoye, who led about 350 members of the ward on a fact-finding mission at Obasanjo’s residence, tore the card into shreds to the admiration of the party followers, some of whom also tore their cards.

Addressing newsmen in Abeokuta, the ex-president said if his involvement in partisan politics would stop him from having a better Nigeria, then he is ready to sacrifice membership of the PDP and become a statesman.

Obasanjo who was responding to enquiry on rumour to expel him from the party, directed his aide to get his membership card and few minutes later he was given, throw it away, declaring that “if this is why we cannot have the Nigeria we desire, I am no longer part of this.”

Obasanjo who is a founding member of the ruling party ruled Nigeria from 1999 to 2007 for two terms of eight years. He had led the country as a military head of state from 1976 to 1979. –AS