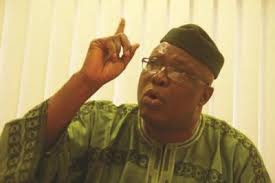 The Senator representing Ekiti Central Senatorial District, Babafemi Ojudu has described as untrue claims by the Peoples Democratic Party (PDP) in Ekiti State that the All Progressives Congress (APC) was planning to frustrate the inauguration of the governor-elect, Mr Ayo Fayose.

In a report made available in The Punch newspaper, Ojudu said claims by the PDP are false and APC had gone to the tribunal to challenge the election of Fayose and the court was about to sit when Fayose invaded the court with his thugs and disrupted proceedings.

Senator Ojudu stressed that the invasion of the court by Fayose’s men informed the relocation of the tribunal outside the state.

His words: “The E-11 had gone to court since May 23 to challenge the qualification of Fayose to contest the election. But there was a strike, and the court later went on vacation; and the suit suffered some setbacks, so they are just hearing it now.

“Why is the PDP in Ekiti blaming its misfortune on other people? It is taken that when anybody is aggrieved, the place to resolve it is the court and not through self-help. The e-11 went to court, and the APC went to court.

“It is the Fayose’s group that went to court to beat up judges and disrupt court proceedings. Why are they now claiming to be victim?”