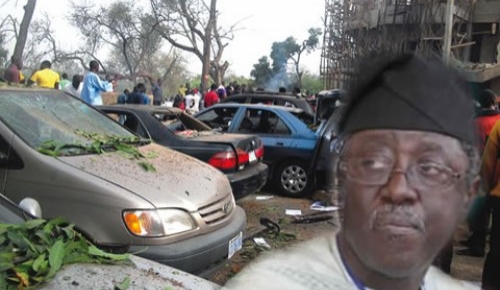 At least 32 people were killed and many others injured in three villages of Langtang South Local Government Area of Plateau State yesterday, in a violence that broke following incidents of cattle rustling.

“We woke up this morning to the sad reality of attacks from arms-carrying men who invaded three villages killing people and burning houses,” Langtang South resident Barrister Solomon Dalong told our reporter.

He said Magama suffered the highest death toll of 23, while seven were killed in Tolgang and two in Karkarshi.
Earlier, Darko said in a BBC Hausa interview that in one of the affected areas alone, one person told him he saw over 20 dead bodies.
For his part, Dalong said the identity of the invaders had not been determined but that witnesses blamed nomadic mercenaries.
“We are yet to ascertain those responsible for the attacks, but people who escaped from the affected areas said the attackers looked like nomads who were well armed,” he said.

In his own account, Daniel Sule King, former Peoples Democratic Party (PDP) official in Plateau State who is from Langtang South, said hundreds of people who fled the three villages where being resettled as he spoke with Daily Trust in the evening of yesterday.

King said the number of the dead was still unclear, adding: “The assailants operated for almost six hours in the three villages which have now been burnt down. There was no security presence throughout the time the attack lasted.”

When contacted on the allegation in some quarters that Fulani herdsmen carried out the attacks in Langtang South, the Plateau State Secretary of Miyetti-Allah Cattle Breeders Association of Nigeria (MACBAN), Muhammad Nura Abdullahi, said Fulani people were innocent as they had already reported their grievances to the commander of the Special Task Force (STF), Major General Henry Ayoola.

“We have been having meetings with the STF on the issue of cattle rustling and just yesterday (Wednesday) we were at a meeting with the STF Commander and the chairman of Shendam LGA when we heard that a group of Tarok youths from Langtang South had rustled some cattle which was confirmed by the Shendam chairman,” he said.

“But with the help of the cattle owners, the STF was able to recover the heads of cattle yesterday (Wednesday). So we condemn any attack on anybody because we don’t want violence and we don’t want any one stealing our cattle.”

For his part, secretary of Miyetti Allah in Shendam LGA, Salihu Jauro, told the BBC Hausa radio that they reported the theft of their cattle to the authorities at state and local government levels but nothing had been done yet.

“Last time 1,100 cows were taken but we got back 700, and we know where the remaining ones are. We informed the authorities even in writing we needed help, we wanted to go and show those cows. At organizational level we are still asking for the authorities to help us get back our cows.”

When contacted, Plateau State Police Commissioner Chris Olapkpe confirmed there were attacks in some villages in Langtang South and some lives were lost, but said he could not ascertain the death toll.

He assured, however, that security forces had restored law and order in the area.

“Only yesterday (Wednesday), we held a meeting with the Ponzhi Taroh (the paramount traditional ruler of the Tarok people found mainly in Langtang North, Langtang South and Wase LGAs of Plateau State), Emir of Wase, and heads of security agencies and other stakeholders on the security situation particularly in the troubled parts of southern Plateau,” Olakpe said.

“It is unfortunate that the Langtang South violence could still occur despite the efforts at building peace through dialogue.”

In its account of the incident, the Special Task Force (STF) in Plateau State said 20 attackers were killed in a shootout with security forces.
STF spokesman Capt Salisu Mustapha said in a statement: “This is to inform the general public and good people of Plateau State that on 27 June 2013, at about 1.00am, suspected Fulani gunmen stormed and attacked Magama village of Langtang South Local Government Area. STF personnel went to the scene to bring the situation under control but the gunmen engaged them in gun duel that lasted several hours. In the process, about 20 of the assailants were killed while some who sustained gunshot wounds were arrested, some motorcycles, weapons and ammunition also recovered.

“Consequently, the attackers withdrew towards Yamini, Yelwa Shendam and Agikamai villages of Shendam LGA. However, some suspected Tarok youths set ablaze some settlements around Yamini and Agikamai while own personnel were in pursuit of the assailants towards Yelwa Shendam. The situation was however brought under control by men of the STF and the area secured as more troops have been deployed in the area.

“STF personnel are in the area conducting robust patrol to ensure no further attack on innocent people. All law abiding citizens are enjoined to go about their normal activities. The Special Task Force wishes to use this medium to restate that any individual or group of persons who are bent in fomenting trouble with the sole aim of truncating the peace of the state have made themselves enemies of peace and would be treated as such. The Special Task Force would leave no stone unturned in fishing out the perpetrators of this dastardly act.”