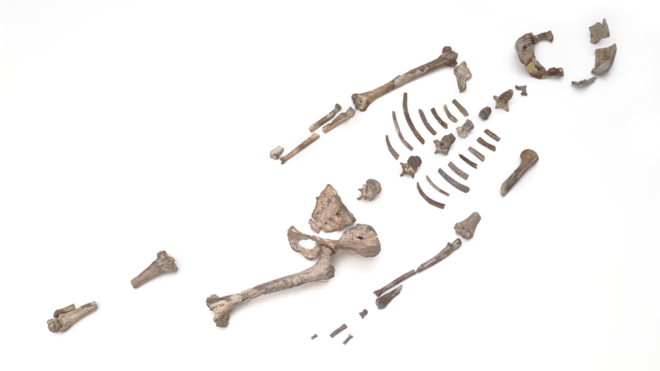 The 3.2 million-year-old fossil discovered in Africa in 1974, popularly known as  “Lucy”, has been periodically brought up for propaganda purposes. However, with the ever-growing means of science and technology, it has become evident that this fossil, which had been long alleged to be  “evidence” for the theory of evolution, has actually dealt a devastating blow to the theory.

Although the Lucy fossil is supposedly portrayed as a transitional form specimen representing the so-called evolution from ape to man, it has in fact proven this claim to be a scenario based on mere prejudice.

Today, all the international scientific journals with a board of academics are, one by one, saying their goodbyes to Lucy. Now, let us take a look at some of the confessions about Lucy featured in journals from the past until today:

In May 1999, the well-recognized Science et Vie journal used the title “Adieu Lucy” (Goodbye Lucy) on its cover and wrote that the apes of the Australopithecus genus should be removed from human genealogy. The article, written upon a new Australopithecus fossil discovery code-named St W573, included the following statements:

However, this farewell was not limited to Science et Vie journal. After that, confessions on the fossil known as “Lucy” kept coming with each passing day.

Evolutionists’ Confession in 2000: “We Should Stop Bringing Lucy Up”

Another article published in 2000 in the journal Nature confessed that Lucy was a member of an ape species. The article wrote that the Lucy fossil, with respect to her “relatively long and curved fingers, relatively long arms, and funnel-shaped chest” was exactly like chimpanzees. Upon the close examination of its hand bones, the confession came that contrary to what had been previously claimed, Lucy was not bipedal, but “knuckle-walked as chimps and gorillas do today.”1

The ape-like features of the Lucy fossil are not limited to its way of walking and hand bone structure only. Its chin is U-shaped, identical to those of ape species, and teeth are quite large compared to humans.

Anthropologists from Tel Aviv University have also pointed out that the upward-projecting mandible  (mandibular ramus) on Lucy’s lower jaw is very similar to that of gorillas, and thereupon, researchers advocating the theory of evolution have consented that keeping the Lucy fossil on the agenda will not serve their interests.2

Evolutionists’ Confession in 2016: “Lucy is a Chimpanzee”

A more recent study on Lucy published in the November 2016 issue of PLOS One gave the same results. Researchers from Johns Hopkins University and the University of Texas, who micro-CT scanned Lucy’s skeleton by tomography, admitted that much of Lucy’s life had been spent in trees and that, from this aspect, it resembled a chimpanzee more than a human being.3

John Kappelman, Professor of Anthropology at the University of Texas at Austin, examined Lucy’s skeleton at the National Museum in Addis Ababa, Ethiopia, and interpreted it as follows:

“I think that by demonstrating with an independent data set that Lucy very likely spent enough time in the trees that the evidence is preserved in her bones provides additional support for the idea that she may have fallen out of a tree as well… She (Lucy) comes out showing a similarity to chimpanzees which suggests that was due to climbing.”  4

However, these facts revealed by modern technology were already known at the time of the fossil’s discovery. In a speech at the University of Missouri, Kansas City on November 20, 19865, Dr. Johanson claimed they had found a knee bone and asserted their allegations that Lucy is the ancestor of man based on this bone. In response to this claim, one of the participants (Roy Holt) asked Johanson, “How far away from Lucy did you find the knee?” Dr. Johanson answered, “About 200 feet lower and two to three kilometers away.” Continuing, when he was asked, “Then why are you sure it belonged to Lucy?” he answered, “Anatomical similarity”. But this answer was met with cynicism because of the scientific inconsistency it posed. The scientific world was already aware of the fact that even completely different species such as dogs and bears could bear anatomical similarities.

As is seen, Lucy has been promoted as ‘man’s so-called ancestor’ for 43 years through a specially devised, biased propaganda, even though it was widely known that the fossilized skull belonged to an ape since the moment of its discovery. The entire world was indoctrinated as if it was the ‘so-called ‘missing link’ between man and ape. However, this unscientific and non-factual supposition has been repeatedly disproved in every means of studying it under the light of advanced science and technology.

To date, circles that advocate evolutionary theory for ideological reasons have made a number of fossil forgeries and fictitious claims. However, not even a single one of these allegations have been proven scientifically, while on the other hand, their fallacy has been consistently demonstrated.

There is only one fact that 21st Century science shows us: Living beings have neither gone through evolution nor gradually transformed from one species to another as a result of blind chance.

Modern life forms and their millions-year-old counterparts all share the same appearance. They did not undergo even a single change despite the millions of years that have passed in between. They have retained the same features as they have today since the moment they came into existence. Living things did not appear on earth through millions of years of evolution but they came into existence suddenly, with all the features they possess intact in their bodies. In other words, they were created by God.

“We did not create heaven and earth and everything between them to no purpose. That is the opinion of those who deny…” (Qur’an, 38:27)