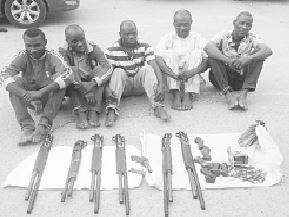 LAGOS—A Lance Corporal of the Nigeria Army was among eight persons arrested by the Inspector General of Police Special Intelligence Response  Team, SIRT for allegedly supplying arms and ammunition to robbers in Lagos.

Among those the gang allegedly supplied arms were those  robbers who raided commercial banks in Lekki, Ikorodu, Festac and Agbara areas of Lagos and Ogun State, where they carted away large sums of money, recently.

It was gathered that the suspects  were picked up at various locations in Lagos, Ogun, Oyo and Borno  states, reseptively, by the SIRT  operatives, led by CSP Abba Kyari,  and officials  of the   Defense Intelligence.

Six automatic pump action rifles, a pistol and some cartridges were recovered from the suspects.

Sources close to the SIRT disclosed that the army  corporal  who was picked up at his duty post in Maiduguri, Borno State,  by men of the Defense Intelligence, is currently undergoing interrogations at the Defense Headquarters, Abuja.

Vanguard gathered that a member of the gang,  who was arrested recently by the SIRT operatives, confessed  during, interrogations that his gang received large supplies of  arms and ammunition, from the soldier, who was  posted to Borno State,  to fight the Boko Haram sect .

A source  further disclosed,  that the soldier, would  conceal weapons within food items heading to Lagos from Borno and the robbers  who were also involved in pipeline vandalism Pipeline  at Ikorodu and Ijegemo areas of Lagos, would credit his bank account upon receiving the weapons.