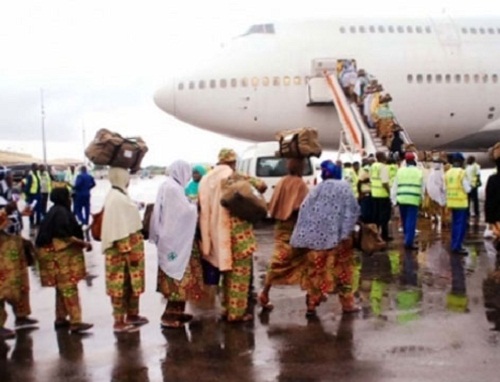 A 29-year old Plateau state’s born teacher, Lohnan Joseph, has been intercepted while trying to board a Saudi-bound flight at Sultan Abubakar III International Airport, Sokoto, on Sunday.

Mr. Joseph, a christian and a former  teacher at Global Kids Academy, Sokoto, was said to have  joined the screening line of Zamfara State intending pilgrims, who were about to board  a flight bound for Saudi Arabia in the early hours  of Sunday.

Speaking to newsmen, Zamfara State’s commissioner of Environment and one of the state’s Hajj officials, Mukhtari Lugga, who was among the people that spotted and consequently intercepted the suspect, said ,”Joseph just came from nowhere and join their line during their screening exercise.

“He was easily identified as an  alien among them because he was not wearing uniform.

“This was what drew our attention to him and we quickly notified the police who came and picked him up for interrogation.”

When asked why he joined the line of pilgrims boarding flight as a Christian, Mr. Joseph said ” I am a Nigerian, so I don’t believe in discrimination, whether you are a christian or Muslim”.

He also said that he wanted to be like Herbert Macaulay, whom he read had traveled to London amidst difficulties.

He later turned up to say that his mission was not to travel but only to visit the airport and come back.

Aminchi raised alarm over the increasing influx of Nigerian girls into Saudi Arabia for prostitution, but said three different syndicates that specialised in trafficking young girls had already been smashed. He said some members of the syndicates and their victims were apprehended and deported to Nigeria after serving various prison terms in Saudi Arabia.

The ambassador stated that some of the arrested girls were not even Muslims but were answering Muslim names to further deceive the security agencies. He noted that Saudi Arabia was attracting prostitutes from Nigeria because of the erroneous belief that prostitution was a booming venture in the Kingdom.

According to him: “It’s really booming, particularly here in Jeddah. There was a time they even called our attention that there are some Nigerians roaming the streets as ‘good evening girls’.  They said Nigerians, I said ‘No’. They said if you want to give us one week we will bring them with their passports. Link: http://www.thisdaylive.com/articles/s-arabia-1-500-nigerians-face-deportation/97325/

On why he was holding foreign currency, Joseph who was dressed in long-slip white shirt and a black trouser said all the money belongs to his sister, who was a business woman and billed to return them after coming back from the airport.

While parading the suspect, Sokoto state’s Commissioner of Police, Shu’aibu Gambo, said the suspect was intercepted at around 9 am, as he attempted to join the screening line of Zamfara states’ pilgrims.

According to Mr. Gambo, when interrogated, Mr. Joseph said he wanted to go to London and had mentioned names of some people as his accomplices.

Mr. Gambo said that, his men would go after the people with a view to establishing their true mission. Link: http://premiumtimesng.com/news/102040-police-intercept-christian-trying-to-board-hajj-flight-in-sokoto.html