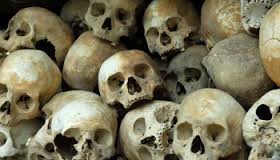 Men of the Nigeria Police Force in Osun state have arrested a 35 year old self-acclaimed pastor, Clement Oyetunde for allegedly being in possession of a human skull and charms.

According to report made available in The Nation newspaper, Clement, who spoke with reporters when he was paraded disclosed that some unseen spirits were chasing him at night and was forced to reveal how he buried the human skull in building he was using as a church.

“I ran out of from the house and called for help so that the the spirits would not kill me inside the house. It was then that the people in my area gathered and they eventually called for police”, Clement added.

Commissioner of Police, Abubakar Marafa, who was represented by the Command’s Public Relations Officer, Mrs. Folashade Odoro, said the suspect was arrested following a tip-off from residents.

The police pro confirmed that Clement in connivance with one Wasiu now at large, buried the human skull inside his house located at Adeowo area of Modakeke.