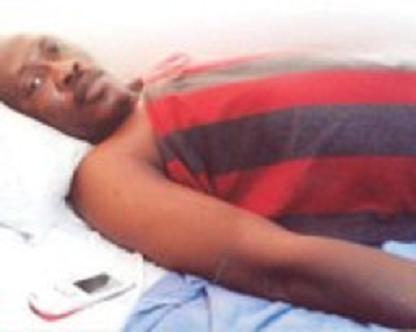 WHEN Mr. Asiayel Wellington, 49, a crack police officer serving with the State Criminal Investigation Department, Kano went to work at the Bompai Police Station in metropolitan Kano on January 20, 2012, he never had any inkling of a tragedy.

In fact, his life was fully ahead of him when he was about heading home after the day’s work. But tragedy, lurking around the corner, was just waiting to happen a few minutes after he stepped out the gate. Even though a sense of doom hung over Northern Nigeria following the violent activities of the dreaded Islamic sect, Boko Haram, he was still sure that harm will not come his way.

Shortly after he stepped out of the office, he heard the battle cry of the blood-thirsty jihadists. Before he could figure out what washappening, he heard the echoes of gunshots. It was like an awe and shock military style tactics as bombs went off indiscriminately. Then, the barracks came under a sustained and ferocious attack by the Islamic sect. In a twinkle of an eye, the sprawling premises was turned into a theatre of war.

When the battle stopped and the smoke cleared, Wellington and several of his comrades in arms had fallen victim to the superior fire- power of the bloodthirsty fundamentalists. All that mattered to them was the body count. The more, the merrier.

Presently lying motionless on his hospital bed in Effurun, near the oil city of Warri, his pitiable sight would certainly melt a heart of stone. Helpless and hopeless, he now wears diapers like an infant to urinate and defecate. It takes him a great effort to raise his hands, which are already disfigured. In great pains, he narrated his ordeal.

Wellington said that his body was riddled with bullets, which affected his spinal cord, turning him to an invalid.  Rushed to the Aminu Kano Teaching Hospital in Kano where he was hospitalized for several months, it was quite obvious after a few days on admission that the team of doctors lacked the skill and equipment to treat him. Overwhelmed by the magnitude of his condition that was gradually turning him into a vegetable, the doctors recommended that he be flown abroad for further treatment, as his case could not be handled in any of the hospitals in the country.

He said that promises made by the Inspector General of Police, Alhaji Abubakar Mohammed and the Minister of Health, Prof. Onyebuchi Chukwu to urgently fly him abroad for surgery when they both came visiting during the heat of the crisis at his hospital bed remained unfulfilled till date. Now the Assistant Superintendent of Police from rustic Ayokoromo in Bururu Local Council of Delta state has been abandoned to his fate.

As his health progressively deteriorated, he said that he applied to his bank from his sick bed for a loan of N2 million which was magnanimously approved.  His problems seemed to be over when his family members raised an additional N2 million. With that, he was flown to Fortis Hospital in India where he underwent a stem cell transplant as well as plastic surgery for a bed sore injury.  He was scheduled to return to India six months later for further treatment but he could not for lack of funds and support from any quarter including the police authority.

Due to his inability to go back to the hospital in India to continue with the treatment after several months of returning to Nigeria, the plastic surgery earlier carried out on him ruptured because the wound did not heal well from the inside.

Hard fact is that the gallant policeman was dumped at the Effurun hospital just to mark time there, as he does not receive treatment of any kind. The clinic does not even have what it takes to be so called. It is a mere consulting clinic at best.

Notwithstanding the fact that he was serving in Kano, he passionately appealed to the Delta State Commissioner of Police, Mr. Ikechukwu Ayo Aduba to help him in whatever means he could, in the spirit of comradeship. He also appealed to Governor Emmanuel Uduaghan to come to his aid.

Almost in tears, he said: “I am appealing to the governor to help and save my life as a father.  The problem I have, occurred while serving my fatherland.”

In his trial and tribulation, Wellington is also calling on Nigerians with an arm full of kindness come to his aid on 07030804364.