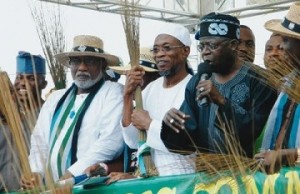 What happened Saturday was actually not a postponement due to security or logistical reasons. What happened was the by-product of overt political interference undermining the independence of the election management body, INEC. The elections were postponed not because they could safely be held. They were postponed because one man, President Jonathan, feared that an election held on February 14 would for him become an election lost. While the mouth was Jega, the words were Jonathan. He chose to place our democracy at risk than do what democracy demands by facing and risking the verdict of the people. That he would use our security agencies to provide his excuse only adds insult to injury.This act was one desperation of a man in fear of defeat. It was not done for the national good. It was the wrong thing done for the wrong reason by the wrong man.The rationale stated by the heavily intimidated INEC chairman does not withstand close scrutiny nor the rigors of logical thought. It is nothing but a lie draped in a falsehood born by deceit.Jega said he hinged his decision on a purported letter stating that due to an impending offensive the security agencies will not have the personnel to spare to adequately guard the polling areas in the northeastern states.For the Service Chiefs to be inserted in the electoral process in this manner and at the eleventh hour reveals nothing but a cynical plot to thwart elections. President Jonathan has revealed that he only wants elections where the guaranty is that he shall win. This is not the nature of democratic elections. Jonathan’s government has purposefully undermined the electoral process because he is not interested in a free and fair honest where the outcome reflects the sovereign will of the people. He wants an elaborate coronation dressed in the garb of an election. The Nigerian people are too smart for this rude trick.This postponement is a smokescreen because what the letter says is that they are advising a postponement of six weeks in the first instance subject to the amelioration of the security situation in the North East. This is coming from a Chief of Defence staff that vowed to crush the insurgents within four months early last year. A year later, nothing has changed. He is now asking Nigerians to believe this government can do in six weeks what it could not do in six years.I ask Nigerians to question why these Service Chiefs decided to launch a major operation a week before the elections? What is new about the security situation in the last two weeks that has not been there these past several years? The date and importance of the election was well publicized. Why did they wait till now? They waited because they were given marching orders by the president to delay the elections.They have gone on an offensive already. However, the true offensive is not against Boko Haram. It is against the Nigerian people and our democracy.If elections could hold in Afghanistan, Pakistan and Iraq, why not in Nigeria where only 14 out of 774 council areas are under siege?This postponement may be the prelude to even rasher more authoritarian action by this desperate, inept government.This postponement has deeply wounded Nigerian democracy. While my party hoped to go into the election and win it that we may offer a new and honest deal to the people. This government continues to feed the people a raw deal.The ambition of one man should not be allowed to affect the destiny of 170 million Nigerians.Nigerians have signalled their desire for change and there is nothing this government can do to erase it.Thus, we do not despair. I ask our supporters and Nigerians to remain calm and do everything to keep the peace. I ask you to renew your determination in the face of this insult to our democracy and common sense. It is inevitable that change shall come and we shall bring it fairly, democratically and peacefully.They will attempt more tricks before the six weeks is over. Each time, they will be defeated by the power of our commitment to a new day in a new democratic Nigeria.Bola Ahmed Tinubu