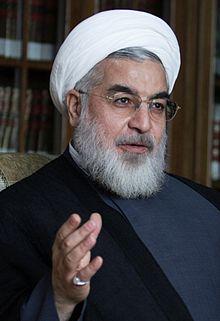 NewsRescue
The Ghanaian President John Dramani Mahama is presently visiting Iran with a huge delegation to boster economic and trade ties with the Islamic Republic. Mahama on Sunday said there are many grounds for cooperation in a variety of fields, including oil and gas, agriculture, power generation and production of cement, home appliances and engineering products.
“We think Iran enjoys a good advantage in these fields and can become a suitable partner for Ghana,” he told a joint news conference with his Iranian counterpart Hassan Rouhani.
Mahama thanked Iran for its “very high quality health services which it offers at very reasonable prices to the Ghanaian people.”
He also thanked President Rouhani for “Iran’s educational support” and the fellowships which it grants to the Ghanaian youths to study medicine and engineering in Iran.
Mahama said Iran’s establishment of an Islamic Azad University in Ghana had allowed the Ghanaian youths of all religious denominations, including Muslims, Christians and Buddhists, to carry on their graduate studies.
“I also thank Iran for its agricultural services which it offers to poor and remote areas in Ghana which have led to better production and food security in these regions,” he said.
Mahama said, “Iran has always been a close friend and supporter of the freedom movement in Africa and has always sought colonialism to leave the continent. Iran was also a supporter of South African struggle against apartheid.”
“Iran enjoys very high potentials and we accord a high value to friendship between Iran and Africa,” he added.
We had hope that #Nigeria will become the center of post-sanctions #Iran’s massive impending economic investments in #Africa. Such investments by #Iran will benefit a dependent economy like #Nigeria that do not produce anything & import almost everything. #Iran’s scientific & technological advancement is known,  #Nigeria should have benefit from this & benefit from technology transfer.
Unfortunately, the clueless Nigerian President #TyrantBuhari chose to be a hunting dog of Western imperialism & a Saudi puppet. No matter how loyal one licked the boots of the greedy Western bloodsucking capitalists they will never transfer their technology to you.
And the Savage Saudis are so backward technologically that only 6% of their Engineers are indigenous, the remaining 94% are foreign expatriates.
Iran has plans to engage in massive agricultural farming in Africa where it will grow crops such as rice, wheats etc to serve both local and foreign exports. Northern Nigeria have vast lands that are suitable for such crops but unfortunately the corrupt elites of Northern Nigeria that are in power today in Nigeria will block such move under the pretext of containing the spread of Shia Islam, as if the millions Nigerian Muslims that are Shias today inclined to Shia Islam due to Iranian investments!
These corrupt elites of Northern Nigeria will deny their largely educational backward followers the benefit of quality education from Iran, the same education that Ghanaian Muslims, Christians and Buddhists are enjoying.This same selfish Northern elites will deny the people of Northern Nigeria the advance Iranian agricultural services that the Ghanaian poor are enjoying today.
Harun Elbinawi
[email protected]
Elbinawi.wordpress.com