The contribution of the ruling Peoples’ Democratic Party (PDP) to the escalation of the Boko Haram insurgency was exposed yesterday by an unlikely source.

The National Security Adviser (NSA), Gen. Owoeye Azazi, said the party’s brand of politics, especially the way it picks its candidates for elections, is partly responsible for the menace now being visited on Nigeria and Nigerians by the Islamic sect.

“A situation where a political party insists on fielding a particular candidate over another to get a massive win, and that if they get that massive win the party has arrived, is the source of the problem,” Azazi said at the second South-South Economic Summit in Asaba.

Azazi, who himself has been widely criticised for the inability of the security agencies to put Boko Haram in check, added: ”How come the extent of violence did not increase in Nigeria until the public declaration of the people that were going to contest election by the PDP? And I would also like to say this, though the PDP people will not agree with me, they would like to attack me, but I hope they do it in private: PDP got it wrong from the beginning by saying Mr A can go and Mr B cannot go, and these decisions were made without looking at the constitution.

“Is it possible that somebody was thinking that only Mr. A could win and that if he could not win, there would be problems in this society?

“Let’s examine all those issues to see whether the level of violence in the North East just escalated because Boko Haram suddenly became better trained, better equipped and better funded or something else was responsible.

“And in any case, how did they get it all done? It takes very long for somebody to be a sniper. But I can assure you that Boko Haram can garner that level of sophistication over time, if it has not got it already.

“There are a lot we know that they are doing and there are a lot that could be done to address the problem. But then, I must also be quick to point out that today, even if all the leaders that we know in Boko Haram are arrested, I don’t think the problem would end, because there are tentacles.

“I don’t think that people would be satisfied because the situation that created the problems are not just about the religion, poverty or the desire to rule Nigeria. “I think it’s a combination of everything.

“Except you address all those things comprehensively, it would not work.

“It is not enough for us to have a problem in 2009 and you send soldiers to stop the situation, then tomorrow you drive everybody underground.

“You must look at what structures you need to put in place to address the problem holistically.

“There are economic problems in the North, which are not the exclusive prerogative of Northerners.

“We must solve our problems as a country.”

“Some people were wearing white garments 22 years ago and calling themselves Republic of Afghanistan in the north, and some people said they were only keeping to their religion and that there was nothing wrong.

“We try to play the ostrich and think things will blow over. I believe we should stop the politicisation of security issues in Nigeria.

“I believe there is a strong element of politicisation of the crisis, where some people were assured that they would win 80 per cent and they did not win.

‘’Is it not amazing that after the elections, the Boko Haram (sect) became better trained, better armed and better funded? But I can assure you that Boko Haram could not have that kind of sophistication without a backing.

“Today, if you arrest all the leaders of Boko Haram, I don’t think the problem will end, because the situation that created the sect has not been tackled e.g poverty and the desire (of some people) to rule Nigeria. These issues cannot be isolated unless they are handled comprehensively.”

Azazi said the present security challenge in the country was getting complicated on account of the 2015 election with different interest groups desperate to have it their way.

He called for economic empowerment and enlightenment of the masses with a view to checking poverty and crimes.

Abuja – President Goodluck Jonathan on Saturday in Abuja refuted insinuation that the “undemocratic’’ nature of the ruling party, the PDP, led to the emergence of the militant Boko Haram sect.

The News Agency of Nigeria (NAN) reports that some national dailies on Saturday quoted the National Security Adviser to the President, retired Gen. Patrick Azazi, as saying that the emergence of undemocratic elements in the PDP led to the creation of militant groups like the Boko Haram sect.

Fielding questions from newsmen after visiting the premises of the ThisDay Newspapers building bombed on Thursday, President Jonathan said the Security Adviser might have been misquoted by the media.
“So, until I read it, I don’t believe that the NSA means that the practices in the PDP are anti-democratic.

“I cannot comment much about what happened in the First Republic, but the aborted Second Republic that I marginally participated, and this Third Republic that I am a key actor, presently as a member of the first eleven, I still see that the PDP is one of the most democratic parties.

“So, I don’t believe that it is undemocratic practice in the PDP that could give rise to Boko Haram or any other group.

“So, probably, people need to ask NSA to explain what he really meant, but I read it from the papers. I don’t believe it is undemocratic practices in the PDP could give birth to this or any other militant groups.’’

On the bombed building of Thisday Newspapers, Jonathan called on all Nigerians to join hands with the government in fighting the menace of terror groups in the country.

“You really see that this is a media house; it’s not a government establishment. Media helps to inform all of us about what is happening and of course the media is now also a victim and that is why we all as Nigerians, no matter what we do, where we come from, we must join hands in fighting this terror.

“And I can assure you that we’lll get over it; other nations have passed through it. Sometimes, when I say that, Nigerians begin to misunderstand that we are just sleeping to wait that it will come and go like wind; No.

On the debate on whether government should dialogue with the Boko Haram sect or not, the president said the two options could be possible depending on the circumstances on the ground.

He reiterated the determination of government to address the challenges posed by terror groups in the country, saying that dialogue with members of the Boko Haram sect was not totally ruled out.

“When you have a terror situation, you also look at global best practice all over the world. Just like war situations, you may dialogue; you may not dialogue, depending on the circumstances.

“But we’ll exploit every means possible to bring this to an end.’’ (NAN) 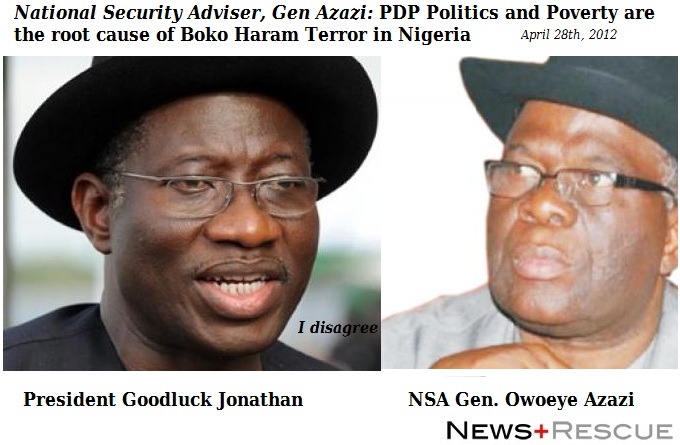