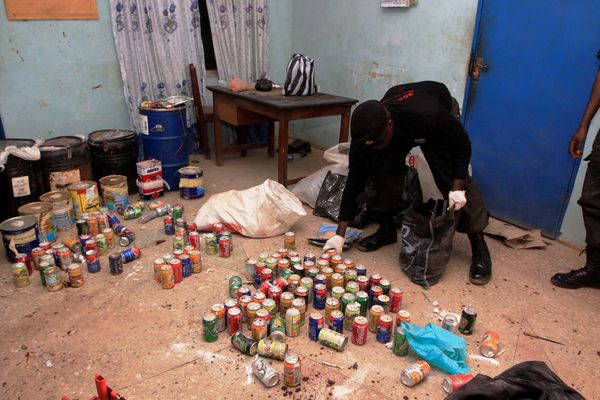 Security operatives in Kano say they have discovered three suspected bomb factories in Sharada, Gaida Ajawa on the Eastern Bye-pass and Mariri, and impounded a large consignment of arms and ammunition. Three members of the Islamic Extremist group were arrested.

The spokesman of the Joint Task Force (JTF), Captain Ikedichi Iweha, said in a press statement in Kano today that the three buildings, which were found in three separate raids, were demolished, adding that they served as bomb factories for the terrorist group.

Among those arrested, he disclosed, was the sect’s bomb making specialist, who was nabbed at the Farm Centre.

Part of the JTF statement read in part:

“Sequel to the series of cordon and search operations, being carried out by JTF in Kano, the JTF wishes to inform the general public that in the early hours of this morning, March 28, 2013, a combined team of operatives stormed a residence at Geida Ajawa on Kano-Western Bye-pass being used as an armoury by terrorists and assorted dangerous weapons were uncovered.

“You may have observed that there has been a rise in recent times of the activities of terrorists in the state, this may not be unconnected with the influx of terrorists fleeing from Maiduguri, Damaturu, Potiskum as a result of pressure being mounted on them by JTF operatives in these areas.

Captain Iweha said more worrisome is the fact that these terrorists secure accommodation easily in Panshikara, Mariri, Farawa, Hotoro , Sharada and other part s of the city, despite appeals by the JTF to property owners to desist from renting out their to terrorists.

He stated further that JTF in the state would allow Kano to be used as a haven for terrorists and restated the resolve of the Task Force to pull down any property found to accommodate terrorists, in addition to arresting the owners of such properties, who would be treated as accomplices.

He assured members of the public that security has been beefed up, while the war against terrorism intensified, in order to usher in a violent-free Easter celebration.

“In the light of the Easter celebration, JTF patrols in town had been increased and new checkpoints introduced. He appealed for the cooperation of Kano residents in the war against terrorism by obliging useful information and other vital clues to the Task Force.

It would recalled that on Wednesday, Police in the state intercepted a bomb-laden vehicle, suspected to have been primed for a suicide attack.