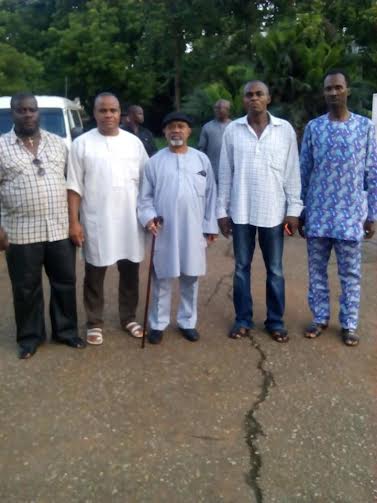 By Obinna Akukwe    @ObinnaAkukwe
President Muhammadu Buhari has vowed to give the Owelle Chukwuma Azikiwe, demised first son of Nigeria’s first President and Zik of Africa, Dr Nnamdi Azikiwe, a befitting burial. President Buhari stated this on Saturday4th July at Aso Villa when he met with a delegation from the Azikiwe Family who came to brief him on their preparedness for the event.. He promised to do everything possible to ensure a smooth burial of a gentleman nationalist..
Those who met with Buhari at Aso Vil;la include Nwamulunamma Onuora Azikiwe (Spiritual Head of the Family), Akunne Arah Azikiwe (youngest brother of Rt Hon Dr Nnamdi Azikiwe) Engr Chukwuma Njaka (PA to late Owelle Chukwuma Azikiwe) and Senator Dr Chris Ngige (ex-Governor Anambra State)
This was against the backdrop of disturbing information that some elements within the Onitsha ruling house have teamed up with some disgruntled politicians in the South East to ensure that the late Zik’s son is buried like a fowl. The grouse of these disgruntled politicians is that Owelle Chukwuma Azikiwe preferred Buhari style of politics of integrity and honesty to the incumbent bandwagon and urged Igbos to support him.. Unfortunately, Owelle died after Buhari’s Victory and they decided to use the occasion of his death to punish him in the grave yard.
To this effect, the entire compound where Zik lived has been left in the worst dilapidated condition ever, the swimming pool taken over by dangerous reptiles, water entering inside the main building during heavy rainfall,aspects of the wal fallen to the ground and the place not fit for habitation.
President Buhari sent Senator Chris Ngige to Ogene Onira residence of Azikiwe to verify and determine the level of dilapidation and preparations and bring detailed situation report. Subsequently another meeting was held at Zik’s House on Monday, 6th July with the following in attendance: Senator Dr Chris Ngige (ex-Governor Anambra State), Engr Chukwuma Njaka (PA to Owelle Azikiwe), Mr Ifeanyi Okwudili (Nephew to Owelle Azikiwe), Rev Obinna Akukwe, (Director General, Igbo Mandate Congress (IMC)), and Barrister Emejulu Okpalaukwu (Assistant National Publicity Secretary, Ohanaeze Ndigbo and Chairman Igbo-Ohanaeze Integrity Groups). The aim of the meeting included assessment and strategizing on how to give a befitting burial to illustrious Igbo son in accordance with Presidential directive.
Igbo Mandate Congress have exclusively reported that ‘Azikiwe Family Urges Igbos to Support Buhari’, insisting that the current President got more votes in the South East than was allotted to him. Since the widely circulated publication, some disgruntled Igbo leaders who rigged elections in the South East,  have ganged up to tarnish the Azikiwe Family name and ensure that this gentleman is buried like nobody. Subsequently, documents which the Great Zik left in the possession of his first son and those   Owelle Chukwuma Azikiwe collected by himself were removed without the authorization of his two children,, Dr Chinwe Azikiwe and Engr Ikechukwu Azikiwe  and family members and burnt, hiding aspects of Igbo history. Senator Ngige was shown the burnt Igbo Historical Materials dumped behind the house.
Obinna Akukwe reported via [email protected],  facebook.com/obinnaakukwe
L-R Mr Ifeanyi Okwudili (Nephew to Owelle Azikiwe) Engr Chukwuma Njaka (PA to Owelle Azikiwe) Senator Dr Chris Ngige (ex-Governor Anambra State) Barrister Emejulu Okpalaukwu (Assistant National Publicity Secretary, Ohanaeze Ndigbo) Rev Obinna Akukwe, (Director General, Igbo Mandate Congress (IMC)) while inspecting Zik’s House on Monday