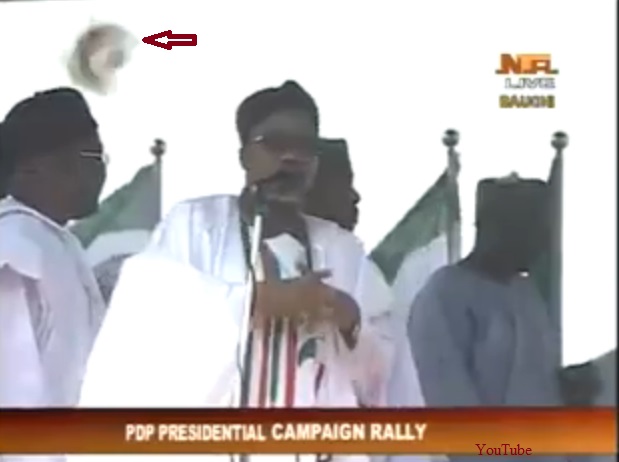 Following the stoning of Nigeria’s president’s campaign team in two PDP states, Bauchi and Katsina, NewsRescue indicts Nigeria’s president, Goodluck Jonathan in the promotion of this “violence” against public officials for poor performance.

As quoted in the Punch of February 4th, 2012, in an article captioned, “Jonathan breaks silence on Bayelsa crisis, knocks Sylva …says ex-gov was stoned for poor performance;” the President of Nigeria said, while speaking of Governor Sylvia of Bayelsa:

“He (Jonathan) claimed that the former governor’s style of leadership and poor performance compelled the people of the state to hurl stones at him (Sylva) during one of his presidential visits.

He later turned to Dickson and said, “You have brought people from Abuja to Yenagoa today. The only thing I want to tell you in the presence of Bayelsa State is that I was here in this place some months ago and Bayelsans stoned the governor. You must work hard to make sure that Bayelsans don’t stone you. The day I come here and Bayelsans stone you, I will follow and stone you.”

Public commentator, Okey Ndibe promptly condemned this promotion of “violence” against public officials in a column article in SaharaReporters on February 6th 2012, he said:

“My first thought on reading that statement was to wonder why this particular president, with his hardly inspiring record, would champion the stoning of incompetent public officials. Even so, I’m not about to dissuade him really. I’m all for stoning the tribe of thieves who have turned – and turn – life in Nigeria into sheer hell. With too many judges all too willing to use technicalities to set privileged looters loose, why, stoning strikes me as a highly attractive option.

I doubt that there are enough stones in Nigeria for the job of stoning the misbegotten, anti-human elements whose expertise is the fertilization of misery.”