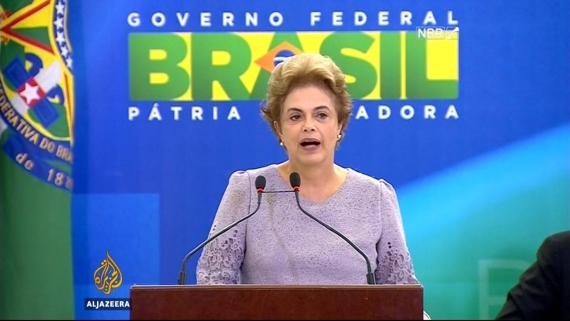 President Dilma Rousseff of Brazil HAS BEEN IMPEACHED over charges of manipulating government accounts for political gains. Brazilian lawmakers shouted, scuffled and even sang as they debated whether to impeach the country’s President Sunday.

After nearly three hours of voting, at least 342 lawmakers in Brazil’s lower house had voted in favor of impeachment, while more than 113 had voted against it.
For the measure to pass, at least 342 of 513 lawmakers had to approve it.
The impeachment motion next goes to the country’s Senate. If a majority approves it there, Rousseff will have to step down for 180 days to defend herself in an impeachment trial.
If the motion is approved, Rousseff could be suspended as early as May. That would be about three months before the Summer Olympics kick off in Rio de Janeiro, an event that was supposed to showcase Brazil as a rising power on the global stage.
Sunday’s vote came after weeks of raucous debates inside Brazil’s Congress and rival protests outside.
https://www.superstation95.com/index.php/world/1178