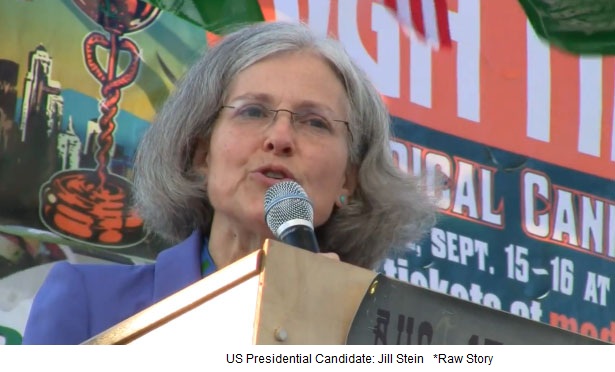 Jill Stein, a presidential candidate from the Green Party, has been arrested in Texas while attempting to resupply protesters camping out in trees to oppose the Keystone XL pipeline, according to anti-pipeline activists.

The Tar Sands Blockade activists said she was released soon after being taken to the Wood County jail in Quitman, TX.

“Dr. Jill Stein has been released from Wood County Jail on a Class B Misdemeanor Criminal Trespass charge,” the group’s website stated.

Tar Sands has been protesting against the construction of the Keystone XL pipeline for the last month. However,  a spokesperson for TransCanada, the company in charge of the pipeline project, confirmed they are preparing to build around the existing blockade.

Jill Stein and two other women came to resupply the tree-sitters in Winnsboro, Texas. Stein and a freelance journalist were subsequently detained by TransCanada security, and handed over to the police.

“Jill Stein has been released from jail,” activists from Tar Sands Blockade say in their Twitter (Image from twitter [email protected])

On her website, www.jillstein.org, the third-party candidate explains she went to the blockade to adress a very important national issue: climate change.

“Everyone needs to step up resistance to climate-killing emissions. Romney and Obama are only talking about the symptoms of climate change in terms of destruction caused by Hurricane Sandy; the blockaders are addressing the cause.”

The Green Party’s media coordinator, Scott McLarty, explained to RT that Jill Stein was focusing on the issue as both Barack Obama and Mitt Romney have ignored climate change during the presidential debates that took place earlier in October at Hofstra University.

“We find it reckless and irresponsible that both the Democratic and the Republican  candidates for president never once mentioned climate change at all during this debates.”

Earlier this month, police arrested Dr Stein and her running mate, Cheri Honkala, after they tried to enter the site of the second presidential debate at Hofstra University.

The two were protesting against the exclusion of all but the two major political parties from taking part in the debate.

RT has been broadcasting all third-party debates live and will host the third and final debate, which will take place on November 5, from its DC studios. Jill Stein is slated to participate, alongside Gary Johnson.  Link: http://rt.com/usa/news/jill-stein-arrested-texas-694/