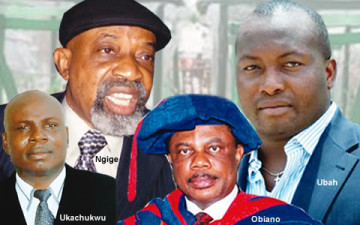 As the residents of Anambra state go to the poll tomorrow, the eyes in the world will be glued to the state for very obvious reasons. This is a state that gave the world her foremost literary giant, Chinua Achebe, the legendary Chukwuemeka Odimegwu Ojukwu and the Pan Africanist, Nnamdi Azikiwe.

Without mincing word, Anambra State election will be the parameter with which to gauge the conduct of 2015 election and just one body will decide how the pendulums of the election will swing– the Independent National Electoral Commission (INEC).

The candidates of this election are all heavyweights in their individual capacity. They all have what it takes to win the election, but one winner must emerge; and this is where INEC will decide if the true winner duly elected by the people will emerge.

There have been accusations and counter-accusations of INEC playing a ready script to favour a particular candidate. The electoral body must prove that it is not a pen in the hands of any writer to script the results.

This is a clash of titans and all the candidates transverses the length and breadth of the state, seeking for votes.

Transform Nigeria Citizens Initiative congratulate all the candidates for the way and manner they comported themselves throughout the campaign. The peaceful nature of Anambrarians was again brought to the fore yesterday as the famous commercial city of Nnewi became the busiest place in the world. All the leading contestants in Saturday’s guber elections descended on the town and campaigned within touching distances of each other- PDP at St Andrews, APGA at Nkwo Triangle and Labour at Anaedo Hall. No rancour or violence, just do your thing and let me do mine as Nnewi town was brought to a standstill.  Politicians from other geopolitical regions need to learn from the maturity of Anambra guber candidates.

This is an election of the people, not for INEC or the military. The security agencies should be professional and neutral and no one should rig the election under any guise of Federal might or power of incumbency.

Since the return of Democracy, this will be the first election that will be conducted in the absence the leader of the state and Ndigbo in general, Chief Odimegwu Ojukwu, Ikemba Nnewi; the politicians should therefore not stain his memory with any act capable of tarnishing the image of the state. We call on the people of the state to exercise their franchise and choose whom they want to lead them in the next four years. The days of sitting in beer parlours gnashing their teeth at the failure of government can only be put to an end by their active participation in the election process.

While the electorates exercise their civic responsibility, the military must not be used to intimidate them under the guise of keeping the environment secured; neither should the candidates move about with their reckless convoy in ways that threaten the peaceful conduct of the election. The National Youth Service Corps (NYSC) members should not be dragged into the politics of rigging, just as INEC must not delay the payment of the ad-hoc staff in ways that will make them threaten to boycott the conduct of the election.

To reiterate: this election will be determined by the umpire, INEC, and they cannot afford to fail Nigerians at this crucial moment. We have positioned our observers and journalists in all communities to bring first-hand information to us and we will not hesitate to tender such in court if the election is marred by fraud and irregularities. The days of bringing ballot boxes and papers to polling booth should not be experienced in this election, as the electoral body had all the time in the world to prepare for this election.

Anambra State that prides herself as the light of the nation must show to the nation the way to go by coming out en masse to vote for the candidate of their choice. Any act to sabotage this election through any means will not augur well for the image of the presidency and it is on this note that we call on the President, who is the father of all the candidates to allow INEC do their job freely, without interference in the spirit of statesmanship.

With the full knowledge that two people cannot govern a state, we urge all aspirants to refrain from making any inflammatory statement is capable of overheating the polity during and after the election period. They should adopt the spirit of sportsmanship and congratulate the true winner, when the election is deemed free and fair. The Journalists who will be covering the elections should also refrain from publishing results when INEC has not announced so; as well as online media owners who may be tempted to report results from polling units, as given to them by their reporters monitoring the election.

As Anambra goes to poll, let all hands be on deck to ensure that the vote counted belong to one man; one woman.

One man, one vote that is our plea…

Transform Nigeria Citizens Initiative (aka Transform Nigeria Movement, TNM) is a Non-Profit Organisation whose vision is to develop that critical mass of citizens who are not only aware of their civic rights but also understand the need to fight for such rights and demand accountability from the leadership